Learn how to enrich the indoor environment with Jackson Galaxy! 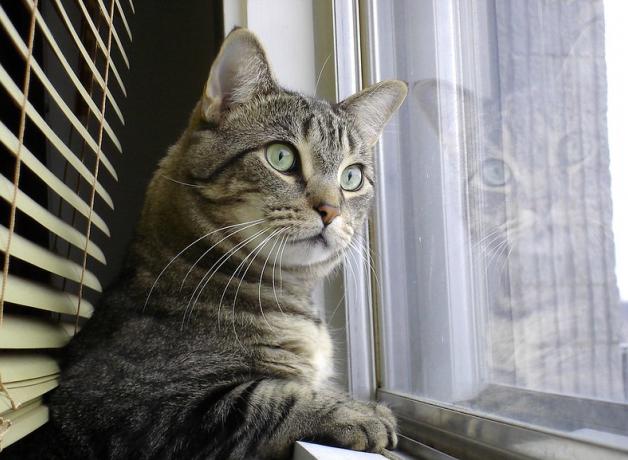 Outdoor cats kill billions of birds each year in North America — and they live much shorter lives than indoor cats. But life as an indoor cat doesn’t have to be boring. On Bring Birds Back podcast, cat behaviorist Jackson Galaxy discusses how just 15 minutes of creative play with your cat can make a huge difference. Plus, letting cats watch birds through the window can act as “Cat TV.”

There is strong debate about whether pet cats should be kept indoors or allowed to roam freely. But outdoor cats kill billions of birds each year in North America — and they live much shorter lives than indoor cats. That’s why cat behaviorists like Jackson Galaxy advocate for keeping our cats indoors:

Jackson Galaxy: And at the same time, that does take away from their lives in a pretty significant way. They wake up every morning needing to go and kill something. So what do we do?

Mark Bramhill: Jackson says it's essential to enrich the life of an indoor cat. And first on the list is committing to a play regime with them.

Jackson Galaxy: Not just waving a wand around, it's about committing to the game. You're role playing, you know, it's method acting. You are a mouse! You are a bird! Get into it!

Mark Bramhill: Just 15 minutes of play can make a huge difference in your cat’s life. Next up is enhancing their indoor-environment.

Jackson Galaxy: We start with the concept of Cat TV: make the windows a destination. Put bird feeders near the windows. You're giving them that ability to sort of passively engage with their raw self.

Mark Bramhill: It is possible to have an indoor cat that lives a rich and fulfilling life. It takes some work on our part — but both our cats and the birds are worth it. You can learn more ways to make your cat happy indoors on our podcast, Bring Birds Back, sponsored by the Cornell Lab of Ornithology. Listen in your podcast app, or at BirdNote.org. I’m Mark Bramhill.