People working together can protect birds 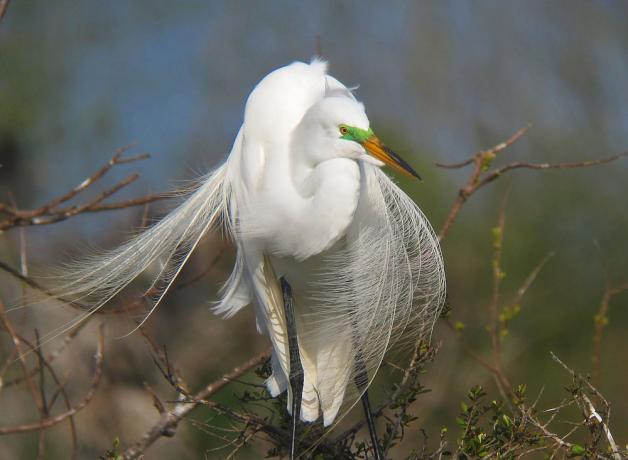 Male Great Egrets have special long feather plumes called aigrettes, which they use in courtship displays in the spring. These beautiful big birds were nearly hunted to extinction for these special feathers, which were used to adorn ladies’ hats. The plight of the egret spurred people to organize to protect these and other threatened birds, resulting in the creation of some of the country’s first bird protection societies.

This is BirdNote.
A large, glistening white bird circles overhead. Its long neck is outstretched, its wing strokes deep, slow, and exaggerated.
It's a male Great Egret showing his courtship moves. As he lands on the rim of a large, flat nest of sticks, a female watches nearby, awaiting the big performance.
[Great Egret calls,https://macaulaylibrary.org/asset/134193]

The male arches his neck backward and points his beak skyward. He flexes up and down on long legs, silky plumes suddenly rising up in a circular array from his back. Like a veil of lace, the plumes circle his torso and quiver with every movement.
Egrets were named for these special breeding season plumes, from the French word “aigrette” (pron: ay-grette). It was these gossamer feathers that nearly caused the Great Egret's demise. At the turn of the 20th century, egrets were hunted ruthlessly for their plumes, which were used to decorate women’s hats. But people began to organize against the slaughter, forming some of the country’s first Audubon societies. And in 1910, hunting egrets for their plumes was finally made illegal.
The Great Egret's image remains familiar today as the symbol of the National Audubon Society, a potent reminder of a species saved by people organizing and speaking up for birds.
For BirdNote, I’m Mary McCann.

Find out what's new with BirdNote. Subscribe to our newsletter at birdnote.org. 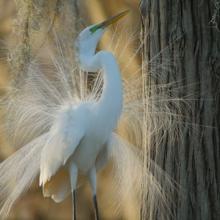 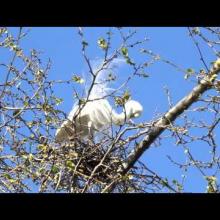 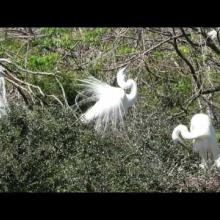