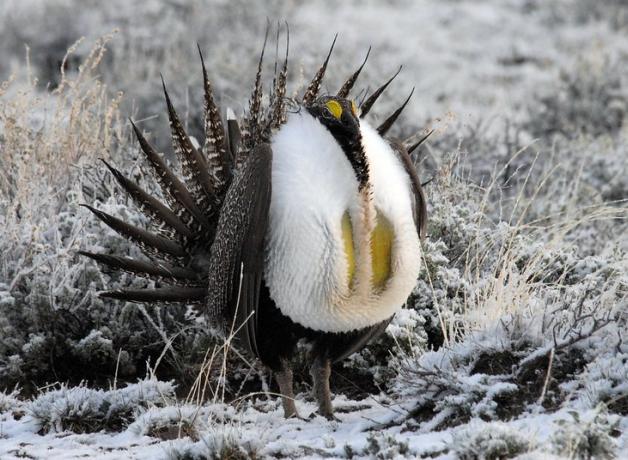 Biologist Michael Schroeder and journalist Ashley Ahearn scour the freshly fallen snow for the footprints of Greater Sage-Grouse in rural Washington State. With fewer than 1,000 of the birds left in the state, they are a rare sight. Learn more about the history of the most controversial bird in the West on Grouse, a series on BirdNote Presents.

I’m Ashley Ahearn. Two years ago, I moved from the city of Seattle to sagebrush country and became obsessed with a funky-looking bird known as the Greater Sage-Grouse.

But I had never actually seen one of these birds. Which is not surprising. There are fewer than 1000 left in Washington State.

So last winter I tagged along with biologist Michael Schroeder to track some down.

[getting out of car ambi in background]

We scour the fresh snow for tracks. At first, all we find are coyote footprints. But then…

23:01 AA: Oh! What’s this one? Is that more coyote here? These guys?
MS: Doesn't look like coyote. Yeah. What are those? They're close together. Just a sec. Not a very distinct track, but it looks like it could be. It could be a grouse. Definitely grouse.
AA: Really?
MS: Yep.
AA: Wait, did I just beat the scientist at finding a sage-grouse tracks?
MS: Well, not surprising, I'm not wearing my glasses. Everybody can see it better than me now.

We follow the small, triangular tracks through the snow for a few minutes and then they disappear.

Join me on the adventure of a lifetime as I chase after this rare bird on our new series, Grouse. Find it on the BirdNote Presents podcast or at BirdNote.org.
###
Producer: John Kessler
Production Manager: Allison Wilson
Editor: Ashley Ahearn
Producer: Mark Bramhill
Associate Producer: Ellen Blackstone
Bird sounds provided by The Macaulay Library of Natural Sounds at the Cornell Lab of Ornithology, Ithaca, New York. GRSG ML50119 recorded by G Keller.
BirdNote’s theme was composed and played by Nancy Rumbel and John Kessler.
© 2020 BirdNote   September 2020       Narrator: Ashley Ahearn