Hendricksons and the Violet-green Swallows 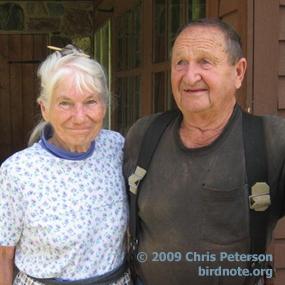 Ray and Gretchen Hendrickson made homes last spring for swallows in their garage in Leavenworth, Washington. When the birds had picked out a hole, they took a coffee can and tin snips, and cut down an inch around the top so they could bend the little flanges out. They tacked the can behind the hole and added a plastic lid so they could clean it. Put holes in the lid for air. That's all!

Many of BirdNote's shows are made possible by The Icicle Fund, supporting the environment, arts, & history.

Interview with Gretchen and Ray Hendrickson

This is BirdNote.
[Their wind chime and the calls of Violet-green Swallows]
Though they’ve flown south by now, the Violet-green Swallows that raised their families on the homestead owned by Ray and Gretchen Hendrickson will be back next spring. That’s because Ray and Gretchen, who live in Leavenworth, Washington, create nest sites for the birds in their garage. Gretchen describes how:
When they’ve picked out a hole they want, knot hole is preferable…take a coffee can and tin snips and cut down an inch around the top so you can bend those little flanges out and tack it behind the hole. It’s good to have a plastic lid so that you can clean it… put holes in it for air. That’s all! They just fly right in!

Here’s what they say when asked why they make the effort:
Gretchen: Oh, we love ‘em!
Ray: Well I just like birds, you know. I hunted birds and everything and I just wanted to give something back to ‘em you know. … One time I was dressing an elk out and I had boned all the ribs out and I was carrying it down through the garden to the bushes, where I was going to hang it up and chickadees was landing on that rib cage as I was walking down there and feedin’, ya know. They was hungry!

What could you do next spring to make a home for birds? [Pause]
BirdNote is grateful to The Icicle Fund whose generosity is helping tell the stories of people who are tuned in to birds and nature. Learn more at birdnote.org.
###
Call of the Violet-green Swallows provided by The Macaulay Library at the Cornell Lab of Ornithology, Ithaca, New York and recorded by G.A. Keller ML12023 and ML105657.  Black-capped Chickadee recorded by R.C. Stein.
Ambient recorded by C. Peterson
Producer: John Kessler
Executive Producer: Chris Peterson
© 2010 Tune In to Nature.org                   October 2010     Narrator: Mary McCann

The Icicle Fund - Learn more!Violet-green Swallows - More at All About Birds 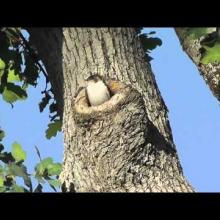