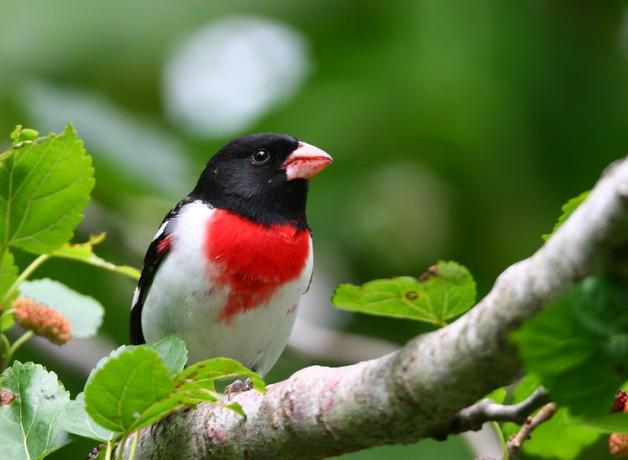 Each spring, millions of songbirds migrate north from the New World tropics to nest in North America. It takes 15 hours on average to cross the roughly 500 miles of the Gulf of Mexico. If wind or rain slows the crossing, the birds are worn out and famished when they reach land. What will they find on gaining the coast? Along the upper Gulf Coast of Texas, many arriving birds ... including Rose-breasted Grosbeaks, like this one ... find respite on High Island, Texas.

High Island - Not An Island, Not Very High

This is BirdNote.
[Calls of Swainson’s Thrush, Brown Thrasher and White-throated Sparrow – not all flight calls]
Each spring, millions of songbirds migrate north from the New World tropics to North America. They’re coming to nest.  Many birds bound for the eastern half of the continent, fly directly across the Gulf of Mexico. It takes about 15 hours to cross the roughly 500 miles of open water. If wind or rain slows the crossing [ocean sounds and wind] the birds are worn out and famished when they reach land. What will they find upon gaining the coast?
Along the upper Gulf Coast of Texas, arriving birds find essential migratory stopover points. Best known are the well-managed sanctuaries of High Island.
High Island is a curious name, because it’s not an island and it’s not very high. The little town of High Island and its wooded sanctuaries sit atop a geologic dome.  A massive intrusion of salt below ground forced the land’s surface upward, like the dome of a piecrust.
High Island’s raised area measures a mile across and rises 30 feet above the grass and scrub of the coastal plain. Just high enough to support large groves of oak that give migrating birds a place to stop, rest, and refuel. [Rose-breasted Grosbeak song]
To a migrating bird approaching land after many hours over the open ocean, High Island must look like paradise.  [Rose-breasted Grosbeak song]
Today’s show brought to you by The Bobolink Foundation. For BirdNote, I’m Mary McCann.
###
Bird Sounds provided by The Macaulay Library of Natural Sounds at the Cornell Lab of Ornithology, Ithaca, New York. Call of Swainson’s Thrush 140295 recorded by H. Batchellor; Call of Brown Thrasher 121997 by H. Batchellor; call of White-throated Sparrow 15609 recorded by R. Stein; song of Rose-breasted Grosbeak recorded by S.R. Pantel; the ambient is from the Indigo Bunting track recorded by G.A. Keller.
Producer: John Kessler
Executive Producer: Chris Peterson
© 2012 Tune In to Nature.org          April 2012 / 2021    Narrator: Mary McCann

More about the Rose-breasted Grosbeak at AllAboutBirdsLearn more about the bird sanctuaries of the Gulf Coast of Texas.Birding in Texas - More at Audubon.org 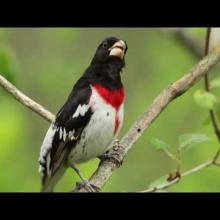