Why some Swainson's Thrushes migrate twice the distance as others 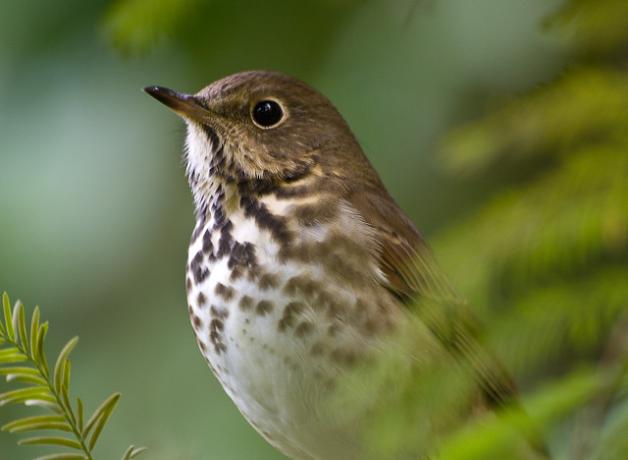 After breeding in Alaska, some Swainson’s Thrushes migrate across Canada to the East Coast before turning south to Ecuador. Others migrate directly down the Pacific Coast to the same destination. Why are some are traveling twice the distance? Dr. Mike Webster of the Cornell Lab of Ornithology explains the roles of genetic coding and genetic variation in this migratory divide.

After breeding in Alaska, some Swainson’s Thrushes migrate all the way across Canada to the East Coast and then turn south to Ecuador. Others breeding not far away migrate directly down the Pacific Coast. [Call of Swainson’s Thrush] So some are traveling twice the distance to get to the same destination. Why? Dr. Mike Webster of the Cornell Lab of Ornithology explains:

“I think the reason…is that the way natural selection works, the way evolution works, is that new adaptations are built on old adaptations. And so if you think about those birds 17,000 years ago as the polar ice caps, the glacial ice caps receded, they just inched their way and moved their breeding grounds further and further north and a little bit west. And they still continue to have programmed in them genetically this route that they used, that their ancestors used and that stuck with them as they moved further and further to the northwest.

So that’s the sort of thing we see today and all sorts of other adaptations: new traits, new adaptations, are built on old traits.”

So even though receding ice allowed the birds to colonize new breeding territory, when it came time to migrate in the fall genetic coding compelled some of them to follow old ancestral routes south. But genetic variation allowed others to pioneer new routes.

You can find more about the migratory divide of the Swainson’s Thrush, at our website, birdnote.org.

Bird sounds provided by The Macaulay Library of Natural Sounds at the Cornell Lab of Ornithology, Ithaca, New York. Song of the Swainson’s Thrush [40658] and calls and chatter [111048] recorded by G.A. Keller.

For more information on the migratory divide of Swainson’s Thrush: http://theornithologyblog.blogspot.com/2013/02/inside-migratory-divide-…