Young sandpipers find their way on their own! 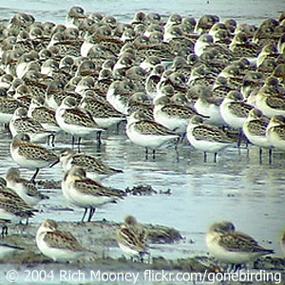 Millions of shorebirds -- like these Western Sandpipers at rest for the moment-- migrate southward in August. By the time this year's hatchlings have put on their first full set of feathers and plumped up for the journey, their parents have already flown south. How do the novices find their way? The young birds possess an inherited magnetic compass and also some ability to reckon using the sun and stars. But this year's experience will make next year's trip easier.

This is BirdNote.
[Sound of wings in motions, duck flying]
Millions upon millions of songbirds and shorebirds rush southward in August, returning to warmer latitudes for winter.
[Sounds of sandpiper flock]
Birds that hatched this summer will be making the trek for the first time. Yet by the time they’ve put on their first full set of feathers and packed on the extra fat they’ll need for the long journey, their parents have already flown south. Weeks ago. [Sounds of sandpiper flock]
How will the novices find their way?
The young birds possess an inherited magnetic compass. And they’re born with some ability to reckon using the sun and stars.
But experience helps, too. Scientists have found that most southbound adult birds that stray far off their usual migration routes quickly reorient their flight paths to arrive at their regular wintering sites. Most young birds fail to make this correction.
Adult birds have used previous migrations to refine their celestial navigation skills. They recognize physical landmarks, including rivers. They may even link smells with the right migration route.
So while young birds have amazing innate abilities, sometimes there’s no substitute for having made the trip before. [Sounds of sandpiper flock]
Like to get BirdNote as a podcast? Sign up at birdnote.org.
I’m Frank Corrado.
###
Flock of Dunlin provided by The Macaulay Library at the Cornell Lab of Ornithology, Ithaca, New York recorded by W.W. H. Gunn.
Producer: John Kessler
Executive Producer: Chris Peterson
© 2011 Tune In to Nature.org   August 2011   Narrator: Frank Corrado