Learning to Listen - Patterns in Songs of the Song Sparrow 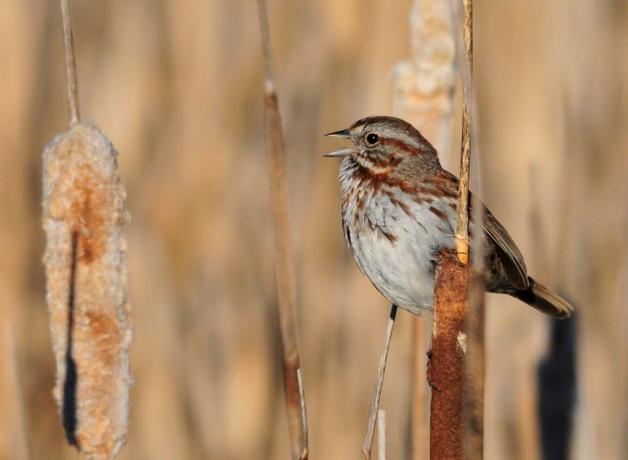 Heidi Hoelting, a musician, listens carefully to the songs of birds. In her piano studio at her home in the woods, she wrote down several variations of the different sounds a Song Sparrow makes. In this BirdNote, Nancy Rumbel plays some of those variations on a bamboo whistle. Listen to all thirteen variations, as played by Nancy.

Learning to Listen - Patterns in Song of the Song Sparrow

In this show, we use a bamboo bird whistle to demonstrate variations in the song of a single Song Sparrow.

Heidi Hoelting, a musician, listens carefully to the songs of birds.

One morning … I was in dreamland and I heard this very loud… rhythm, coming through my window, and it woke me up.

…. I decided I was going to try to write down the rhythm… so it went [Nancy on whistle, variation #1]

In all, Heidi documented 13 variations.

What’s happened in this later stage of life …with the kids gone and the pets gone …is that… I’m beginning to perceive the complexity of all the life forms that have been around me all along... that I just thought of as “Oh, those are birds’ and now they’re not just birds, they’re a hundred kinds of birds, with a hundred songs…

Hear all the variations, played by Nancy Rumbel, on our website, birdnote.org.

Learn more about Song SparrowsHear all thirteen variations on bamboo whistle, as played by Nancy RumbelSong Sparrows can be very territorial -- Check out this study!