Listening From Inside the Egg

Unhatched chicks seem to recognize the sound of a predator! 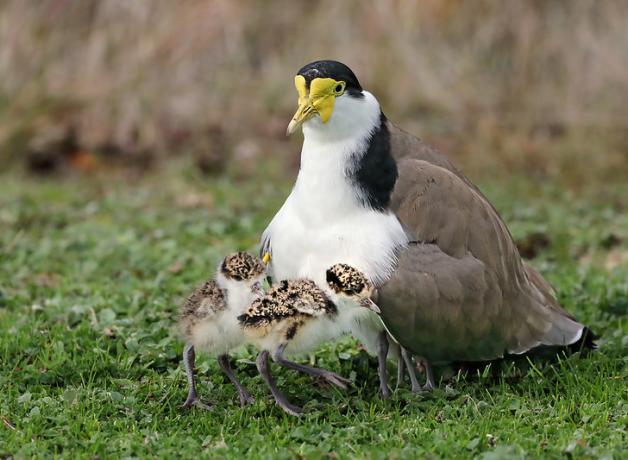 Shorebird chicks hatch into a dangerous world, so they need to be vigilant from the start. Researchers in Australia noticed that some shorebird chicks began chirping in their final days in the egg. The chirps fell silent when the researchers played recordings of a Little Raven, which hunts for young birds. The finding suggests the chicks are listening carefully and may be able to tell threatening sounds from non-threatening ones.

BirdNote®
Listening From Inside the Egg
Written by Conor Gearin

Shorebird chicks hatch into a dangerous world. Larger birds would love to turn them into a snack. So they need to be vigilant from the start, emerging with eyes open and walking within a few hours. And scientists are learning that some species may be aware of the outside world while still inside the egg.

Researchers in Australia studying Masked Lapwings and Red-capped Plovers, two species of shorebirds, noticed the chicks began chirping in their final days in the egg. They wondered if the chicks would fall silent if their parents left and a predator appeared. They played a recording of Little Ravens, which hunt for young birds, over eggs a few days from hatching.

The shorebird embryos made fewer chirps during the raven recording, while adult shorebird alarm calls and white noise had no effect.

The finding suggests the chicks are listening carefully and may be able to tell threatening sounds from non-threatening ones. It’s still unknown just how much unhatched birds can learn. Birds as different as gulls, grebes and terns start chirping before they hatch. Future research could reveal just how alert these precocious chicks are within the egg.

Do Birds Hide From Predators Even From Inside an Egg? | AudubonBaby Birds Learn Calls From Their Mothers While Still In The Egg | All About Bi…