These birds give it their all during the breeding season 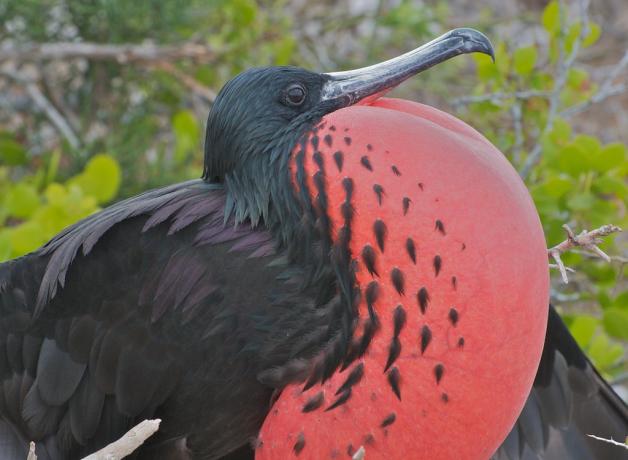 Magnificent Frigatebirds are huge, gangly seabirds found around the warm waters of the Western Hemisphere. When it comes time to mate, males inflate giant red throat sacs, then rattle and drum their bills against them to create jazzy percussive sounds.

Male birds give it their all to get a female’s attention during the breeding season. Some males sing, and some build intricate nests. But then there’s the Magnificent Frigatebird.

Magnificent Frigatebirds are huge, gangly seabirds found around the warm waters of the southern U.S., and all the way down to Brazil. They often nest in large colonies, building nests out of sticks in the trees and shrubs.

When it comes time to mate, the jet-black males perch in groups of up to thirty at a time. Displaying side by side, each male inflates the skin of his bright red throat pouch, which swells into an immense, elongated heart shape below his long, slender beak.

Then the male rattles his bill, drumming it briskly against the huge red balloon of his pouch. The result is a crazy, jazzy mix of drums and clicks.

As they drum, the males also wave their heads, quiver their wings, and screech a bit—and then they really step it up when a female glides overhead.

When a suitably impressed female lands beside a male, the two will shake their heads in rhythm, clack their bills together, and intertwine their necks.

A perfect ending. But just the start of raising a family.

Bird sounds provided by The Macaulay Library of Natural Sounds at the Cornell Lab of Ornithology, Ithaca, New York. Recorded by Martha Fischer.

A video worth linking to: https://academy.allaboutbirds.org/an-inflatable-throat-magnificent-frig… 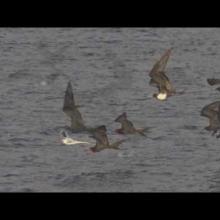 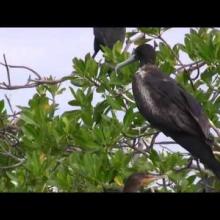