Gone? Or just not what they seem? 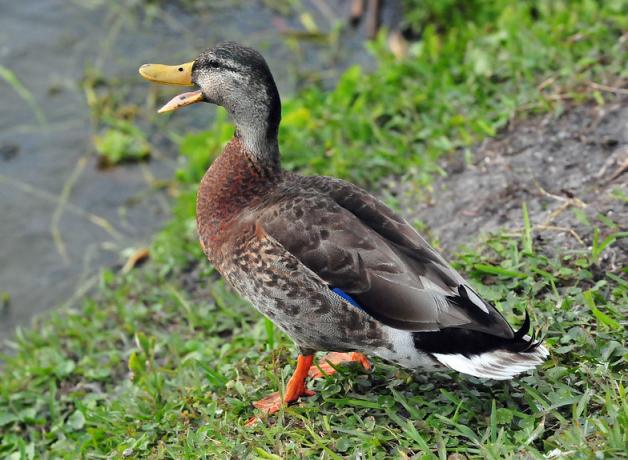 By late summer, the male Mallard’s need for fancy feathers to attract the females has passed. These birds have molted, and their bright feathers are replaced with mottled brown ones. Subdued colors help camouflage the male ducks, protecting them from predators. Come fall, the male Mallards will molt again and become the colorful dandies we remember.

Ducks Unlimited protects habitat for Mallards at all stages of their lives. Learn more below in Related Resources.

[Mallards chattering at edge of water]

Ah, Mallards at your local pond… They’re our largest dabbling duck and among ducks, the most abundant species. They’re the source of all domestic ducks except the Muscovy. (muss-KO-vee) There’s a female making herself heard… [Female Mallard quacking]

But does it seem that all the brightly colored male Mallards have disappeared? By now, the male duck’s need for fancy feathers to attract the females has passed. The male Mallards have molted, dropping their bright green, reddish, black, and white feathers, and replacing them with mottled brown ones. Changing into more subdued colors for the months of summer, helps camouflage the male ducks, protecting them from predators. Come fall, the Mallards will molt again and return to the colorful dandies we remember.

In the meantime, while all the Mallards look like brownish females, there is one way to distinguish males from females. Look closely at the bill: the male’s bill is dull yellow, while the female’s is orange marked with black.

And watch to see which duck is quacking. [More female quacking]

Male Mallards make a more subdued and raspy call, mostly when courting or greeting, or when they feel threatened.

Check out the conservation efforts of Ducks UnlimitedLearn how duck stamps support waterfowl conservationMallard – More at the Audubon Guide to North American BirdsMallard - More at All About BirdsWhat does a male Wood Duck in eclipse plumage look like? 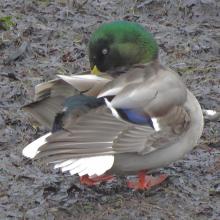 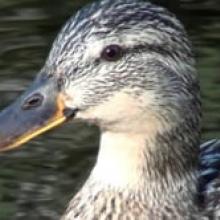