Imagine the journey these birds make! 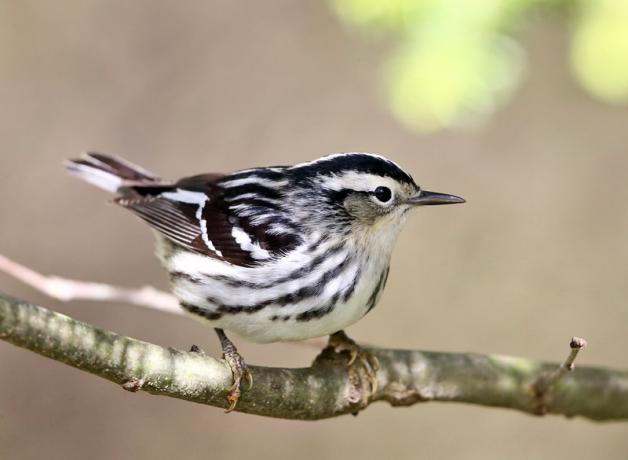 Millions of migratory birds are winging their way north. In her jazz composition Cerulean Skies, American jazz composer Maria Schneider, celebrates their return. She says, “What really inspires me when I’m looking at the birds in Central Park is imagining the journey that they’ve been on.” She pictures the birds, like this Black-and-white Warbler, on their wintering grounds in the tropics, until it's time to migrate north again.  “All these birds are going up into the air … then navigating and flying by the light of the stars."

“What really inspires me when I’m looking at the birds that I see in Central Park is imagining the journey that they’ve been on.”

“All these birds – thousands of birds — are going up into the air and
disappearing…a little pinprick into the sky.  [Selection from tenor solo] And then we go into the mind’s eye of one little warbler that’s navigating and flying by the light of the stars…[selection from accordion solo]

“They’re so delicate!  And you think about the mystery of it all! And you
just think, ‘Wow, we’re so small in what we can do.’ And this is just – it’s so big. And then you feel completely insignificant and at the same time, it makes you feel more significant because you’re a part of it. That’s what I love about getting out in nature and taking those things in.”

To hear more of our interview with Maria Schneider, join us at birdnote.org.
[Full band sound from Cerulean Skies]

Learn more about Maria SchneiderMaria explains her process of creation - and sharing!You can buy "Sky Blue" at ArtistShare.comListen to an NPR story about “Winter Morning Walks”Check out this New York Times feature about Maria The Economist has more about Maria, past & present!Black-and-white Warbler – More at All About Birds