It’s a featherweight match with an official title at stake: Michigan State Bird 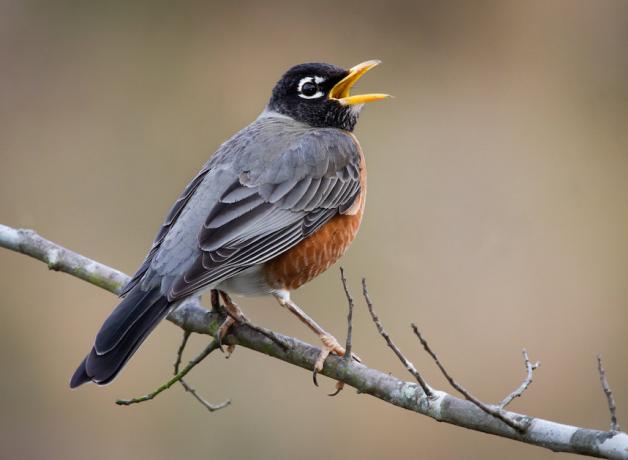 Since 1929, Michigan’s state bird has been the American Robin. But lots of people think it’s time for a change. The Black-capped Chickadee is a popular favorite, as is the endangered Kirtland’s Warbler. But it turns out that it’s pretty hard to get a state bird changed.

LADIES AND GENTLEMEN. This is BirdNote.

Feathers have been flying in Michigan. It’s a three-way melee, pitting robin against chickadee against warbler. A featherweight match with an official title at stake: Michigan’s State Bird.

In this corner, the American Robin. Michigan’s state bird since 1929, when it beat the Black-capped Chickadee in a neck-and-neck contest decided by the judges - of the state Audubon Society.

And in this corner, our contender, back to fight for the title, the Black-capped Chickadeeeeeeeee!.

Unlike the robin the Black-capped Chickadee stays in Michigan all. year. long. There’s no flying south for this snow bird. Back in 2000, a campaign to dethrone the robin fell just short.

But what’s this? A new challenger appears!

It’s the Kirtland’s Warbler! Until recently, due to deforestation, these little birds only bred in Michigan. But now they’re increasing.

The winner, and still champion the robin. He’s harder to beat than he looks. Just ask Wisconsin. Or Connecticut. The robin’s their official state bird, too.