Migrations: You're Going the Wrong Way!

Sometimes birds get lost, too. 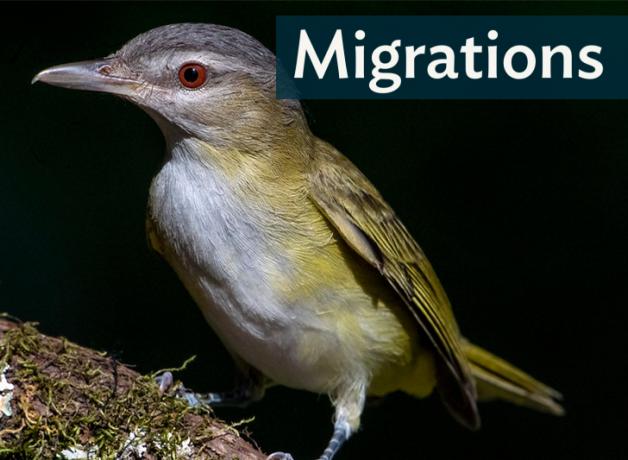 During migration, some birds change orientation, often by a full 180 degrees, and travel almost the same distance — but in the opposite direction — as the rest of their species. The phenomenon is called misorientation. First-year birds are particularly susceptible. Many vagrant birds never find their way back on course, but some do, getting more comfortable with the route each year.

This is BirdNote.
[Yellow-green Vireo song https://macaulaylibrary.org/asset/325197691]
A Yellow-green Vireo sings on its summer breeding grounds in Belize. This migratory songbird looks remarkably like the Red-eyed Vireo commonly seen in the Eastern U.S., with a bright white eyebrow and striking red eye.
[Yellow-green Vireo song https://macaulaylibrary.org/asset/325197691]
In the fall, most Yellow-green Vireos head to South America to wait out the winter months. But wait! This particular vireo is going north instead! You’re going the wrong way!
[Clip from Planes, Trains and Automobiles: “You’re going the wrong way!”]
For reasons biologists don’t fully understand, some birds change orientation, often by a full 180 degrees, and travel almost the same distance as the rest of their species — but in the opposite direction!
The phenomenon is called misorientation. It’s one of the most common errors in migration patterns among songbirds, especially those in their first year. For this reason, every now and then, a wayward Yellow-green Vireo ends up northward in … say… California.
Unfortunately, many of these birds that we call "vagrants" never find their way back to their native range. But some of the disoriented birds do eventually find the proper route, getting more comfortable with the journey each year.
[Yellow-green Vireo song https://macaulaylibrary.org/asset/325197691]
For more about how to see rare migratory birds in your area, start at our website, BirdNote dot org.
I’m Mark Bramhill.