One of the world’s most charismatic groups of birds 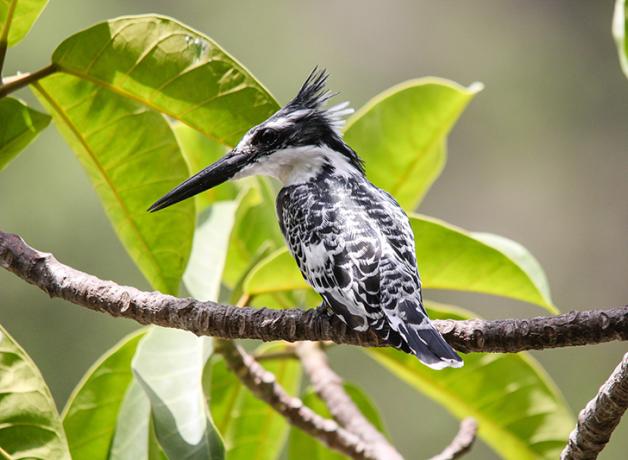 In North America, kingfishers fish. But in tropical regions of Asia, Africa, and Australia, most of the roughly 90 species of kingfishers don’t “fish.” They hunt in woodlands, where the smaller ones, like the four-inch Pygmy Kingfisher, eat grasshoppers and centipedes. Larger kingfishers will take frogs, reptiles, small mammals, and even snakes. This Pied Kingfisher, found in Africa and Asia, does eat fish.

Did you know that Australia’s Laughing Kookaburra is a member of the kingfisher family? It has been known to dispatch snakes up to three feet in length.

Kingfishers. They fish. Right? The clue’s in the name. Over most of the waters of North America, it’s the Belted Kingfisher. Europe’s single species is the small, brilliant blue, much beloved Common Kingfisher. [Common Kingfisher calls, http://macaulaylibrary.org/audio/56433, 0.05-.07]

But when you hit tropical regions of Asia, Africa, and — especially — the vicinity of Australia, it’s clear that despite the group name, most of the roughly 90 species of kingfishers don’t “fish.” They hunt in woodlands, where the smaller ones, like the four-inch pygmy kingfisher, will eat grasshoppers and centipedes, and the larger ones will take frogs, reptiles, small mammals, and even snakes. [Laughing Kookaburra, http://macaulaylibrary.org/audio/6582]&nbsp;

No matter whether the kingfisher you see is wrangling a snake or plunging for a fish, you’ll be looking at a member of one of the world’s most charismatic groups of birds [Laughing Kookaburra, http://macaulaylibrary.org/audio/6582]