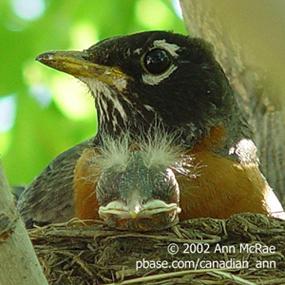 American Robins (like this male seen here with its young), House Finches, and Song Sparrows may all nest within one small garden. By selecting different nesting strata, the species avoid competing for the same nesting sites. If you plant your garden in multiple layers – trees both short and tall, shrubs, and ground-hugging thickets – you may be rewarded with a multi-layered medley of bird song.
Support for BirdNote comes from Audubon Park Wild Bird Food, welcoming the return of songbirds with full feeders. Spring bird-feeding tips at audubonpark.com.

This is BirdNote!
An American Robin belts out its spring song from the top of a tree. [American Robin song] Perched on the roof of a garden shed, a House Finch joins in with its refrain. [House Finch song] Next, a Song Sparrow hops out of a low thicket and adds its music to the medley. [Song Sparrow song]
You can find these three species nesting within one small garden, making their nests in a tree, a large shrub, or directly on the ground. By selecting different nesting strata, the species avoid competing for the same nesting sites.
[Medley of the three songs]
Ground-nesting birds include sparrows, juncos, quails, ducks, and some warblers.  These birds are particularly vulnerable to predators and human disturbance while on their nests.
The adult birds will stay on or near the nest while incubating eggs. But once the young depart, the parents leave, too. Birds won’t occupy their nests until the next breeding season.
If you plant your garden in multiple layers—trees both short and tall, shrubs, and ground-hugging thickets—you may be rewarded with a multi-layered medley of bird song. [More medley of the three songs]
Learn more about gardening for birds when you come to our website, BirdNote.org. I’m Mary McCann.
### 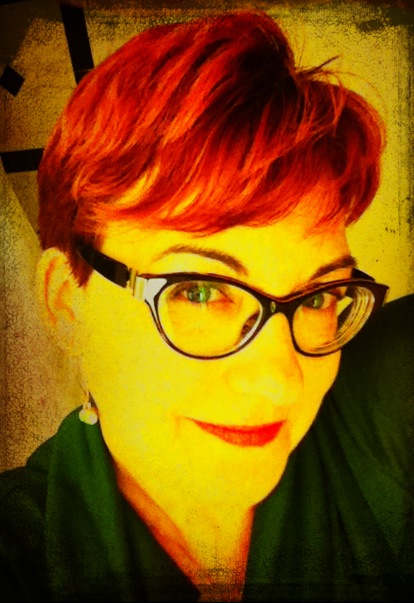