Noticing Birds in the Back Yard, With Denise Acsay

“Birds give me peace.” 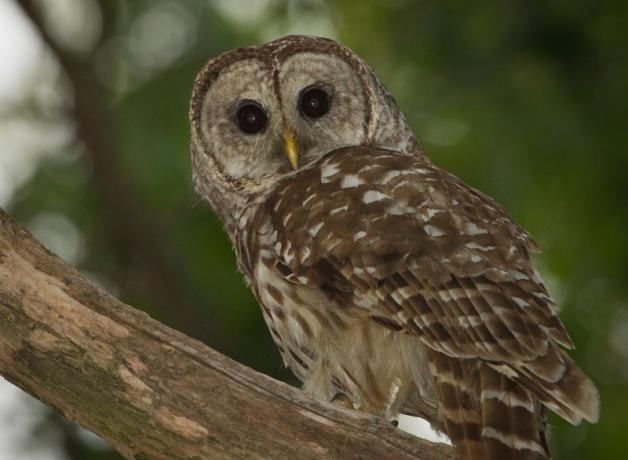 BirdNote asked listeners to tell us about the bird life around their homes. BirdNote’s Dominic Black met up with Denise Acsay — who lives on San Juan Island in Washington State — to learn more about Denise’s love of birds such as this Barred Owl. Denise says her favorite bird sounds are heard in spring, “when they’re really just intoxicated . . . it’s the physical manifestation of the way one feels in the spring. New life. Hope. Promise...”

Written by Dominic Black from an interview with Denise Acsay

In May, we asked listeners to tell us about changes they’ve seen in the bird life around their homes. One of those who replied is Denise Acsay. Dominic Black met up with her at her home in the woods of San Juan Island, an hour off the coast of Northwest Washington State. And asked her who first taught her to notice natural world…

DA: I think it was my mother.

DB: How old was she?

DA: Ninety six. She was definitely an outdoors person. She skied, she swam, she hiked. Lived on her own till the very end.

DB: You know if I was to ask you what birds mean to you, say, what would you say?

DA: They mean a connection with nature. They give me peace.

DA: Almost any bird in the spring, when they’re really just completely intoxicated. The sound – it’s the physical manifestation of the way one feels in the spring, you know. New life. Hope. Promise...

DA: Sometimes I do, yeah, yeah…yeah. I always feel that they’re sort of a benediction when they come.