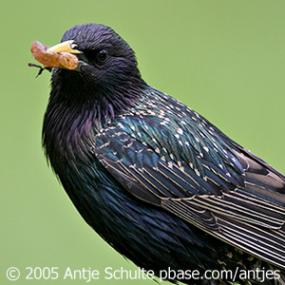 You can find birds nearly everywhere. Even parking lots. Next time you're at a mall, grab a coffee, take a seat outside, and look around you. How many different species of birds can you see? Crows and gulls command the rooftops. Rock Pigeons abound. A European Starling-like this one-picks up the errant raisin or crumb and carries it to its nest nearby. Peer into a starling's nest.

Would you like to become a BirdNote benefactor? Begin here.

This is BirdNote!
Once you’ve discovered the world of birds, you’ll see them nearly everywhere. Even parking lots. [Parking lot sounds. Honk. Car going over a speed bump.]
Next time you’re at a shopping mall, grab a coffee, take a seat outside, and look around you. How many types of birds can you see? Crows and Glaucous-winged Gulls command the rooftops, sparring and diving on each other comically. Rock Pigeons are everywhere, bobbing their heads, males bowing and chasing females. [Cooing of a Rock Pigeon]
Drop a crumb, and a House Sparrow snatches it up. Bolder and bolder, it advances, hopping from the sidewalk, to the back of a nearby chair, right onto your table. [House Sparrow chatter]
House Finches sing from the wires and nest in the ivy hanging from the side of a building. [House Finch song]
Check out the trees, too — the tiny nest in the fork of a tree is probably that of an American Goldfinch. [Tsureet tweet-tweet-tweet of the goldfinch]
And a European Starling flies into a crevice in a nearby wall, to nest or roost.  [Squawk of a starling]
Urban nature. [More parking lot sounds]
Peer into a starling’s nest when you visit BirdNote.org. [Squawk of a starling]
The BirdNote team is grateful for BirdNote’s benefactors, who, through their goodwill and philanthropy, make it possible for people to connect with nature. I’m Frank Corrado.
###
Bird audio provided by The Macaulay Library of Natural Sounds at the Cornell Lab of Ornithology, Ithaca, New York.  Rock Pigeon recorded by A.L. Priori.  House Sparrow, House Finch, American Goldfinch and European Starling recorded by G.A. Keller.
Ambient city sounds recorded by Kessler Productions.
Producer:  John Kessler
Executive Producer:  Chris Peterson
© 2009 Tune In to Nature.org
ID# 041206urbanKPLU  urban-01-2009-04-11