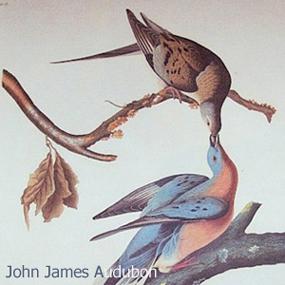 The last Passenger Pigeon in the world died on September 1, 1914. What happened to these lovely long-tailed doves? Huge flocks offered easy shooting, and the birds were hunted to extinction. We now have the awareness and tools to make sure that over-harvest and loss of habitat don't happen again. Read about The State of the Birds.

This is BirdNote!
When Columbus first landed in the Americas, there were nine billion birds in what later became the United States – about one-third of those birds were Passenger Pigeons.
In 1805, while in Kentucky, ornithologist Alexander Wilson watched a flock of Passenger Pigeons flying overhead. The birds darkened the sky from horizon to horizon. It took four hours for the flock to pass.
John James Audubon also observed these blue-gray, long-tailed doves with iridescent green on their necks and rosy-red bellies. He wrote, “The air was literally filled with pigeons; the light of noonday was obscured as by an eclipse; the dung fell in spots, not unlike melting flakes of snow; and the continued buzz of wings had a tendency to lull my senses to repose.”
Audubon wrote that he continued to watch the flock pass overhead for three full days. He calculated 1.1 billion birds.
The large flocks offered easy shooting of these birds, which were marketed for food. A century later, they were all gone. The last Passenger Pigeon in the world died in the Cincinnati Zoo at 1:00 pm on September 1st, 1914.
[More music.]
There was a time in our history when we thought things were inexhaustible. We now have the awareness and the tools to make sure that loss of habitat and immense over-harvest don’t happen to other species we value. To be a voice for conservation, consider joining your local Audubon chapter. Begin with a visit to BirdNote.org. I’m Frank Corrado.
###

Birds and conservation information at StateOfTheBirds.org