Paul Bannick and the Polar Bears 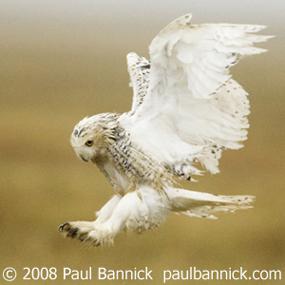 Passion and strength of character often define those who go to great lengths to photograph birds. Photographer and naturalist Paul Bannick braved the threat of polar bears, when he went to the Arctic to photograph this Snowy Owl and other birds. You can see more of Paul's photos at PaulBannick.com.

Passion and strength of character often define those who go to great lengths to photograph birds. Let’s listen to photographer and naturalist Paul Bannick:

“I recall one trip when I was going to the Arctic to photograph Snowy Owls and Short-eared Owls on the nest on the tundra, and I had thought about polar bears. As you know, they are one of the few animals that will actually hunt human beings.

And I was told, ‘No don’t worry. When you’re going to be up there, the ice will be out. And polar bears only come on to the tundra when the ice is in.’ Well, I felt reassured by this and went ahead and planned my trip, and here I was, the last week of June, flying into Barrow Alaska and noticing that ice was actually IN.

So when I landed, I talked to some of the villagers and I asked the first one, ‘Should I be worried about the polar bears coming out onto the tundra?’ And the man said, ‘It’s up to the bears.’

So I tried to find someone else and there was an older gentleman, he looked quite wise, and I asked him again, I said, ‘I plan to be out on the tundra for several days in my blind. Should I worry about the polar bears and will they be dangerous to me.’ And he pauses for what seemed like five minutes and he looks up at me without moving his head up, just his eyes raised toward me, and he says, ‘Let the bear decide.’

And so I decided to do that: let the bear decide. And I took my blind out on the tundra and I went to photograph the owls.” 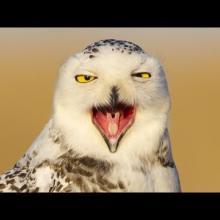