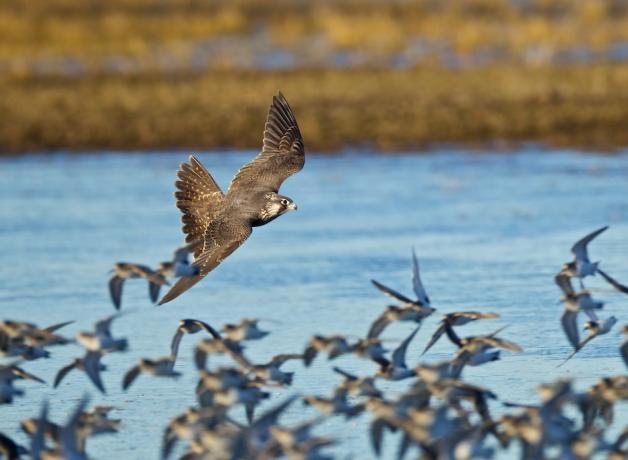 Have you ever seen a Peregrine Falcon attack a flock of shorebirds, igniting a breathtaking aerial display? The late falcon researcher Steve Herman called this pattern of evasion "instantaneous synchronicity." The shorebird flock will often form a cone, with the sharpest point shifting continuously to face the attacker. The ripple and flash of the flock of shorebirds may help them evade the falcon's onslaught. Amazingly, just a few decades ago, very few Peregrines existed in the US. Thanks to the ban of DDT, they've made a comeback.
Have you or a group of friends done something imaginative to help birds?  Would you like others to know about it? Please contact us here.

This is BirdNote!
Imagine, if you will, your nemesis diving at you out of the sun’s glare at more than 200 miles an hour.
[Simulated sound of Peregrine diving]
If you’re a shorebird, your nemesis is often a Peregrine Falcon.
The Peregrine's attack ignites a breathtaking aerial display of what falcon researcher Steve Herman* called, “instantaneous synchronicity” - the ripple and flash of a flock of shorebirds, turning as one to evade the falcon's onslaught. [Sounds of shorebirds in flight] To decrease their mortal danger, the flock will often form a cone, with the sharpest point shifting continuously to face the attacker.
[Sounds of shorebirds in flight]
Peregrine Falcons are found on every continent except Antarctica. In the US, they suffered a calamitous decline after World War II. The pervasive use of the insecticide DDT had led, through the food chain, to fatally thin eggshells. But with the banning of DDT in 1972, Peregrines rebounded to become what Herman calls, “The biggest story of avian conservation success in the 20th Century.”
The Peregrines' story shows how vitally important human choices and actions are to the natural world.  [Ocean waves once again]
Have you or a group of friends done something imaginative to help birds?  Would you like others to know about it? Tell your story at our website, birdnote.org.
###

* We note with sadness the passing of Steve Herman in April 2020. His work was admired far and wide. https://twitter.com/evergreenstcol/status/1248767731614265344?lang=en
Call of the shorebirds (flock of Dunlin) provided by The Macaulay Library of Natural Sounds at the Cornell Lab of Ornithology, Ithaca, New York. Recorded by W.W.H. Gunn
Producer: John Kessler
Executive Producer: Chris Peterson
© 2012 Tune In to Nature.org     July 2016/2020     Narrator: Michael Stein