On the lookout for endangered cranes! 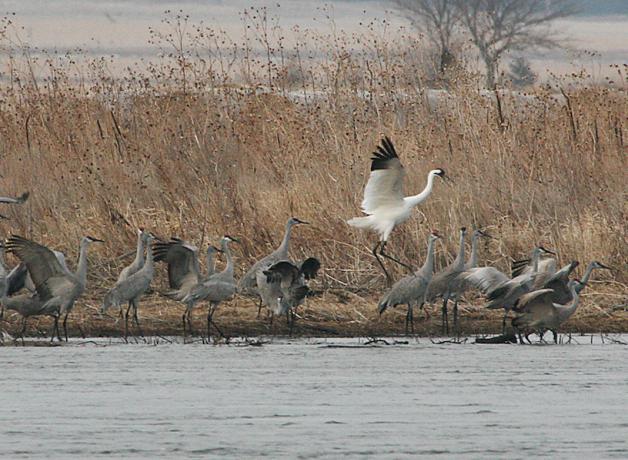 Every day between early October and early November, two planes fly over the Platte River in Central Nebraska. The flight crews are searching for endangered Whooping Cranes, like the one pictured here with Sandhill Cranes. If Whooping Cranes are spotted, a ground crew monitors the birds’ behavior and documents their choice of habitat. This careful observation is made possible by a precedent-setting court ruling that grants endangered wildlife use of the Platte River’s water. (This photo was taken on the main channel of the Platte River on Crane Trust lands in south-central Nebraska.)

[Wind on the land plus water at river’s edge]

We’re here this early November dawn on the Platte River in Central Nebraska. Out of the east, in the first light, flying low above the river’s braided channels comes a small aircraft. [Sound of Cessna 172 four-seater airplane] You could call it the Platte River Crane Plane.

The pilot and two observers are searching for Whooping Cranes.

With a population of just 270*, these birds are among the most endangered in North America. Breeding in Wood Buffalo National Park in Canada, the cranes fly south to winter along the coast of Texas. In Autumn they pass through the Platte River Valley, typically during late October and early November.

If cranes are spotted, a ground crew hurries to their location to monitor the birds’ behavior and document their choice of habitat. This careful observation is made possible by a precedent-setting court ruling** giving endangered wildlife and their habitat legal standing in the use of the Platte River’s water.

Two planes fly every day between early October and early November [dividing the 90 miles of river between Chapman and Lexington, Nebraska. ***] They fly at first light because the cranes, to protect themselves from predators, stand in the river’s shallow waters at night.

One could do worse than to be, at dawn, an observer of cranes.

Wind in reeds recorded by Gordon Hempton of QuietPlanet.com.  Lapping of water recorded by C. Peterson.

Learn about the Platte River Recovery Implementation ProgramLearn more about Whooping Crane migrationThe Crane Trust is making a difference!Whooping Crane - More at All About Birds