Ravens and Crows - Who's Who?

They look a lot alike, but there are subtle differences... 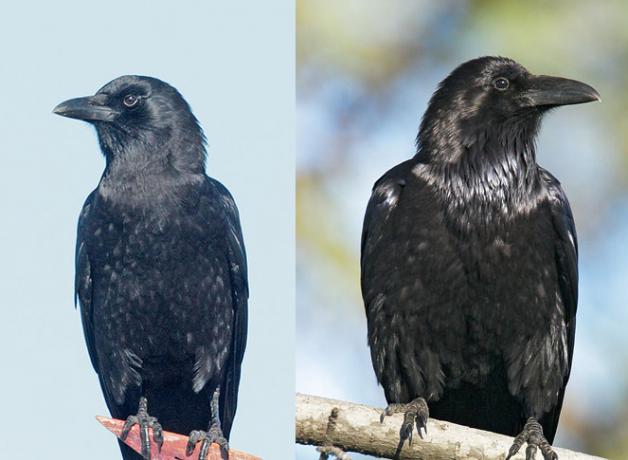 Is that big black bird a crow or a raven? How can you tell? Ravens (seen right here) often travel in pairs, while crows (left) are seen in larger groups. Also, study the tail as the bird flies overhead. A crow's tail is shaped like a fan, while the raven's tail appears wedge-shaped or triangular. Another clue is to listen closely to the birds' calls. Crows give a cawing sound, but ravens produce a lower croaking sound.

Learn a lot more about these birds in this blog post.

Ravens and Crows – Who’s Who?

So, you’re walking down the street, and a trash can’s been tipped over. And eagerly picking through the riches strewn across the sidewalk are several black birds. They’re crows. Or…ravens. No, definitely crows…maybe?

How can you tell the difference? Well, first off: listen. Crows caw:

And while Common Ravens and American Crows look quite similar, there are a few ways to tell them apart:

Ravens are larger. And they often travel in pairs. Crows usually hang out in larger groups.

Next, try to get a look at the bird’s tail.

A crow’s tail feathers are basically all the same length, so its tail opens like a fan. But a raven has longer middle feathers in its tail, so it looks more like a wedge or a triangle.

By far, though, the best way to tell these two birds apart is to look at their bills. The crow has a modest bill, but the raven has a great big chunky-looking beak that pretty much says "Yeah, that’s right. I’m a raven."

Ravens tend to stick to the wilder parts of the world, like woodlands and open spaces. But when you’re walking past those trash cans, you’re probably seeing crows. 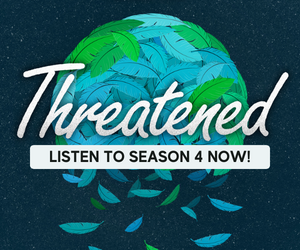 Learn more - and compare photos!Always more to the story! Caw vs. Kraa...Learn more at Audubon Magazine!Ravens, Crows, Jays and Magpies - More at All About BirdsFind your local Audubon society