These gruff birds have a softer side 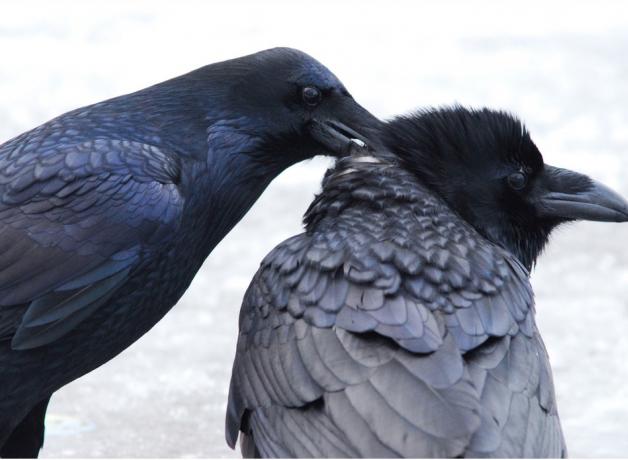 Ravens are seen as tricksters in many traditions. But Common Ravens have a softer side. During courtship, a pair will often sit side by side, sometimes preening each other's feathers. And during that ritual, one or both may make soft warbling sounds. Raven nestlings sometimes make this same sound after they've been fed. Compared to the usual raucous raven calls, this one is soothing. It's called a comfort sound.

The Common Raven is our largest songbird, and it has a voice to match its size. [Crawk, crawk of Common Raven] We've visited ravens in the company of wolves and – in myth – taking control of the tides, changing the course of a river, even placing the sun in the sky. Ravens are seen as tricksters in many traditions. [Crawk] But ravens have their softer side, too. [Raven's “warble”]

Common Ravens probably mate for life. And in the same way that a human couple sometimes has to work to maintain their attachment, a pair of ravens exhibits behaviors that strengthen their relationship, or “pair bond.” [Raven's “warble”]

Throughout the year, a pair of ravens may soar wingtip to wingtip, swooping in unison, tumbling through the sky. [“Warbling” of Common Raven] During courtship, the pair will often sit side by side, gently preening each other’s feathers. And during that ritual, they may make these warbling sounds. [Extended “warbling”] Raven nestlings sometimes make this same sound after they’ve been fed. Compared to the usual raucous raven calls, this one is soothing, to adults and to their young. It’s called … a “comfort sound”. [Extended “Warbling” of Common Raven]

Find raven songs at Macaulay Library of Natural SoundsCommon Ravens - More at All About BirdsVideo: Raven couple allopreening in the snow