Nature is resilient - but it takes time and resolve! 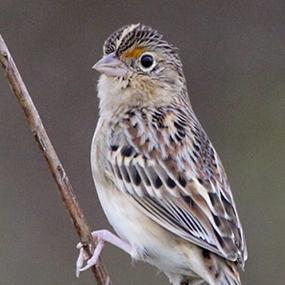 More than a decade ago, Douglas Gill, a professor at the University of Maryland, received a telephone call from Harry Sears. After 250 years of human alteration and intense cultivation, had the wildlife habitat on the Eastern Shore of Maryland been ruined beyond recovery? Along with many partners, they began a grassland restoration project, and within four years, a magnificent, complex habitat came alive, followed by the near instantaneous arrival of species of birds they had not expected. Grasshopper Sparrows – like this one – appeared by the hundreds. Gill said, “Ecology is resilient. The seed bank is inexhaustible. Recovery can happen fast.”


This is BirdNote!
[Northern Bobwhite]
Thirteen years ago, Dr. Douglas Gill, a professor of biology at the University of Maryland, received a telephone call. The caller, Dr. Harry Sears, was seeking guidance in converting 230 acres of farmland on the Eastern Shore of Maryland into wildlife habitat, especially for threatened and endangered birds. His question: Is it possible? After 250 years of human alteration and intense cultivation, has the wildlife habitat been ruined beyond recovery?
They set out to find out. Douglas Gill describes what happened.
“Within four years of starting this grassland restoration project…what appeared was a magnificent, complex grassland habitat with as many as 260 species of plants that we know had not been present…for birds and wildlife habitat for the last half century. The second result was the near instantaneous arrival of species of birds… we had not anticipated, and they appeared by the dozens, by the hundreds -- the Grasshopper Sparrows by the hundreds. Bobwhite Quail were responding well...  Vesper Sparrows...”

Douglas Gill said, “We assumed that things had been ruined. But nature is waiting. Ecology is resilient. The reservoir of seeds, the seed bank, is inexhaustible. Recovery can happen fast.”
[Call of Northern Bobwhite]
Learn more about the restoration project and its many partners, on our website, BirdNote.org.
###