From Sea-Tac Airport to the Skagit Valley 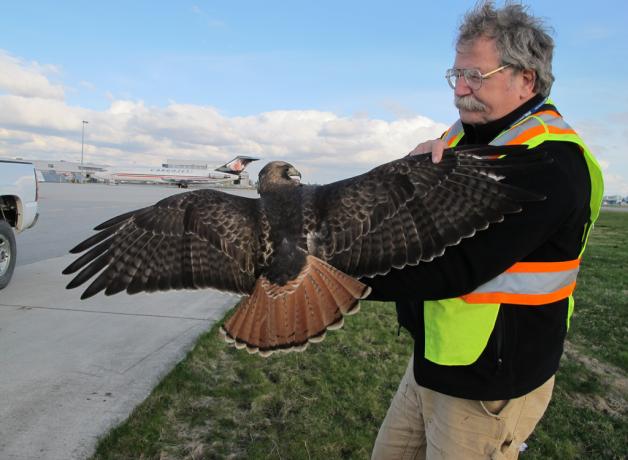 Traveling home after a flight into Seattle’s Sea-Tac airport, you might share a ride on the shuttle with a Red-tailed Hawk! To protect passengers, planes, and birds, airport biologists Steve Osmek and Bud Anderson capture raptors for relocation away from the airport. Then, as a public service, Bellair Charters of Bellingham, Washington, carries the birds to safer foraging grounds. After weighing, measuring, banding, and tagging the hawks, Bud (pictured here with a Red-tailed Hawk) releases them in the wide-open country of the Skagit Valley.

Traveling home after a flight into Seattle’s Sea-Tac airport, you might share a ride on the shuttle with a Red-tailed Hawk! [Scream of a Red-tailed Hawk] That’s because ⁠— to protect passengers, planes, and birds ⁠— airport biologists Steve Osmek and Bud Anderson capture raptors and relocate them away from the airport.

Steve and Bud have moved more than 1200 raptors -- 16 species, including 5 types of owls. [Call of Red-tailed Hawk]] Every time the biologists catch a bird, they move it far enough away that it won’t come back. But with Seattle’s famous traffic, especially during rush hours, each journey can take four to six hours. That’s a lot of driving, particularly when you catch three or four hawks a week.
That’s where Bellair Charters of Bellingham, Washington, comes in. [Sound of bus starting up] The airporter carries the hawks ⁠— at no charge ⁠— secure in covered animal carriers, north to safer foraging grounds near Bud’s home in the Skagit Valley. [Scream of a Red-tailed Hawk]

After weighing, measuring, banding, and wing-tagging the hawks, Bud releases them in wide-open country.
“It’s a flat farmland area. It’s loaded with voles. It’s loaded with shorebirds, with starlings, with ducks. And so it supports a high number of hawks. …Also there aren’t too many people and certainly no low-flying jets, so they’re much safer… We take ‘em to what we call a better restaurant.”

You can learn more about Bud Anderson’s decades of work with raptors at BirdNote.org.