It's amazing what you can see. But be careful out there! 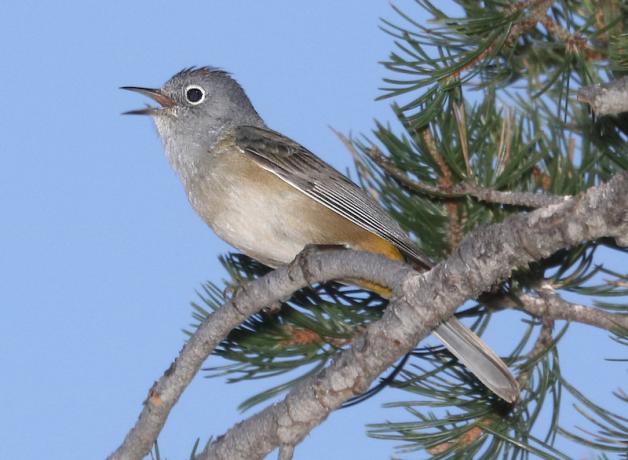 Birding on the road? You'd be amazed! The freeway's wide median and mowed shoulders offer birds a ribbon of open grassland, perfect for hunting. Watch especially for raptors perched on poles and bridges. Songbirds favor wire fences and posts. Smaller roads offer hedgerows and shrubs. But this Colima Warbler is one bird you won't see from a paved surface.

Sign up for a field trip at your local Audubon chapter to see what you can see!

This is BirdNote!
[Traffic noises]
Stuck in traffic these days? Inching along with nothing to do?
Well-known birding expert, David Sibley, notes that the territories of all but one regularly occurring land-bird species in the “Lower Forty-Eight” can be seen from a paved surface. That means plenty of birds to view from a car. [More traffic sounds]
Of course, birding from the driver’s seat can be dangerous, but watchful passengers can find avian roadside attractions.
Peregrine Falcons often perch on towers beside bridges, waiting for the unwary Rock Pigeon to fly by. [Sounds of pigeons flying]
Football-sized Red-tailed Hawks [Red-tailed Hawk calling] and other large birds of prey sit on light-standards, telephone poles, and trees along the roadside. The highway’s center-median and mowed shoulders offer these birds a ribbon of open grassland for hunting rabbits, rodents, and small birds. Once a predator discovers a good feeding area, it returns often.
And what’s the one species you shouldn’t expect to see in your roadside birding? According to David Sibley, it’s the Colima Warbler, a tiny Mexican songster that barely stretches its territory into southern Texas.
[Song of Colima Warbler]
Find your local Audubon chapter and sign up for a field trip to see what you can see. Start at BirdNote.org. I’m Frank Corrado.
###

Colima Warbler - More at birds.audubon.orgRed-tailed Hawk - More at All About BirdsFind your local Audubon chapter