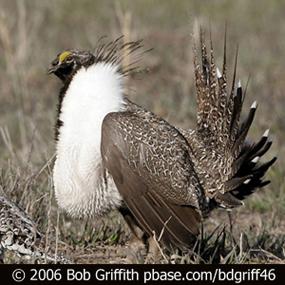 At a display area, known as a lek, the male Greater Sage-Grouse perform for mating rights, while the smaller females look on. Today, the Greater Sage-Grouse is seriously endangered, its fate intertwined with the loss of sage habitat. Millions of acres have been converted to cropland, and on millions more, the sage has been removed.

You can learn more about the challenges of the grouse at StateOfTheBirds.org, and about conservation efforts at Pheasantsforever.org.

Learn more about gamebirds and habitat at StateOfTheBirds.orgGreater Sage-Grouse - More at All About BirdsLearn about conservation efforts at PheasantsForever.org