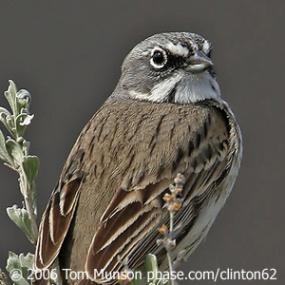 A chill wind ruffles the feathers of a male Sagebrush Sparrow (formerly known as the Sage Sparrow), as he sings atop a tall sagebrush. It is late February, a few miles from the Columbia River in Central Washington. Sagebrush Sparrows are arriving north from wintering in the Southwestern deserts. Unlike most songbirds, male and female Sagebrush Sparrows often arrive on their nesting grounds already paired.

American Bird Conservancy is working to save sageland -- and Sagebrush Sparrows.

In 2013, the species was renamed Sagebrush Sparrow.

This is BirdNote!
[Sage Sparrow song]
A chill wind ruffles a male Sage Sparrow’s feathers as he sings atop a tall sagebrush.
[Sage Sparrow song]
It’s late February, a few miles from the Columbia River in Central Washington. Sage Sparrows are arriving north from wintering in the Southwestern deserts. Unlike most songbirds, male and female Sage Sparrows often arrive on their nesting grounds already paired. About the size of a junco, the dapper sparrows are dressed in soft grays and browns. A dark spot, centered on the white breast, stands out like a stickpin. Sage Sparrows forage on open ground amid the sage, running rapidly – with their tails cocked up – looking like scampering chipmunks.
[Sage Sparrow song]
Through April’s burst of brilliant wildflowers and summer’s desiccating heat, the Sage Sparrow sings on. [Sage Sparrow song] Its plaintive song seems to convey a sense of its precarious future in the West. Sage Sparrows prefer to nest in areas of mature sage, where some plants are tall and densely clumped. [Sound of sprinklers] Much of this habitat has now been converted to agriculture, or fragmented, or overrun with exotic grasses. Little of what remains is protected.
But American Bird Conservancy is working to change that!
[Sage Sparrow song]
Learn more and see photos, when you come to BirdNote.org. I’m Mary McCann.
###
Song of the Sage Sparrow provided by The Macaulay Library of Natural Sounds at the Cornell Lab of Ornithology, Ithaca, New York. Recorded by D.S. Herr
BirdNote's theme music was composed and played by Nancy Rumbel and produced by John Kessler.
Ambient Sprinkler recording by C. Peterson.
Producer: John Kessler
Executive Producer: Chris Peterson
© 2013 Tune In to Nature.org     February 2013     Narrator: Mary McCann 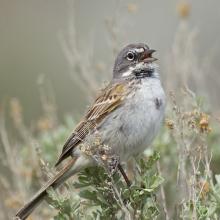 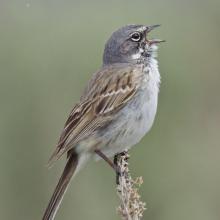