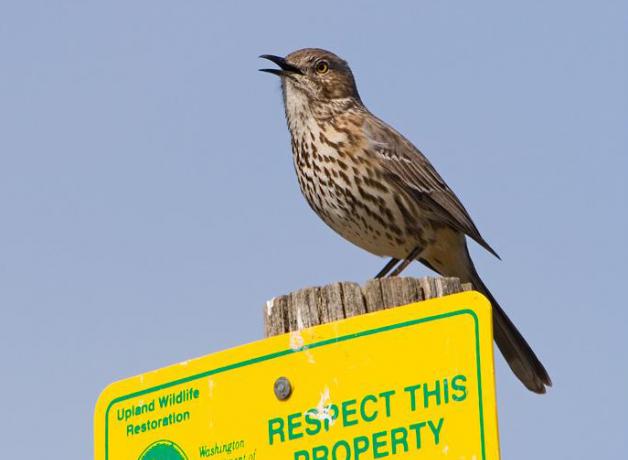 The glorious song of the male Sage Thrasher rings out every spring from tracts of sagebrush throughout the West. Sagebrush was once widespread in the Great Basin region, and so were the thrashers. But huge areas of sagebrush were turned into alfalfa and potato farms, and the songs of the thrasher aren't so common today. Sagebrush badly needs advocacy. The Important Bird Areas program works to protect key habitats for birds.

This is BirdNote.
[Sage Thrasher singing]
This glorious song rings out every spring from tracts of sagebrush throughout the West.  A male Sage Thrasher is proclaiming his territory.
[Continued singing of Sage Thrasher]
Sagebrush was once so widespread in the Great Basin region that you’d never be out of earshot of one of these sandy-brown, long-tailed songsters. But miles of drab gray-green sagebrush don't inspire the love that redwood forests or alpine lakes evoke in us.
[More Sage Thrasher song]
The dry land that sagebrush inhabits proves to be superb for agriculture if water, that magical ingredient, is added.  When irrigation became available through the Bureau of Reclamation, huge areas of sagebrush were turned into alfalfa and potato farms. Drive through much of this area now, and you'll hear only sprinklers.
[Pssht pssht pssht sound of a sprinkler]
Sagebrush is a rich habitat, home to many birds and mammals found nowhere else, and it badly needs advocacy. A worldwide effort called The Important Bird Areas program works to identify and protect key places that provide essential habitat for birds.  Discover ways you can connect with the program, and the Sage Thrasher, when you come to birdnote.org. I’m Mary McCann.
[More Sage Thrasher song]
###

Lacking advocates, this habitat has been lost at a prodigious rate. 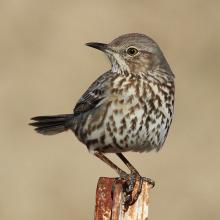 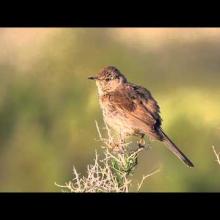 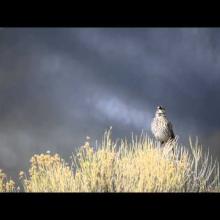