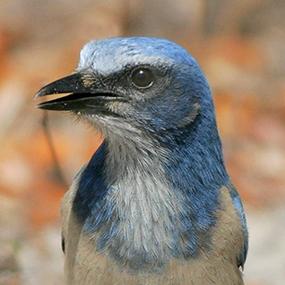 Florida Scrub-Jays are Florida’s only truly native bird. They breed nowhere else in the world. But today, their population is just 10% of what it was 200 years ago. Marianne Korosy of Audubon Florida is among the people working to save the jays. She coordinates the Jay Watch program, which monitors Florida Scrub-Jays and restores their habitat in places like the Lake Wales Ridge Important Bird Area. “It’s about making a difference on one property at a time,” she says.

Florida Scrub-Jays – beautiful, curious, and easily approached – are Florida’s only truly native bird. They breed nowhere else in the world. But today, their population is just 10% of what it was 200 years ago.

One remaining stronghold is an area of ancient sand dunes and scrub oak in south-central Florida, called the Lake Wales Ridge Important Bird Area. Marianne Korosy (Ka-RO-see), with Audubon Florida, coordinates Jay Watch there, which monitors the birds and restores their habitat.

“It’s about making a difference on one property at a time. Seeing the delight in people’s faces when they see their first Florida Scrub-Jays and stand there just completely fascinated, captivated by the beautiful blue and silver birds. It’s teaching people that they can make a difference.”

Dr. Korosy sees the Florida Scrub-Jay as a symbol of how land-use changes have affected native birds. Lands converted to growing citrus and other agriculture have lost the oak ecosystems the jays require. [Call of a Florida Scrub-Jay]

What does Marianne recommend for people anywhere who like birds?

“Get out and volunteer! Work to create healthy habitat for plants and animals that are native to your area. And help spread the message! Take your friends and family out with you. Get outdoors!”

There’s more to this story at birdnote.org.

Listen to another BirdNote show about the Florida Scub-JayJohn Fitzpatrick & Cornell Lab are conducting fascinating research!Learn more about Jay WatchVisit Audubon Florida onlineThere's more at BirdLife International"Florida Scrub-Jay - A Species in Peril"Florida Scrub-Jay – More at All About Birds 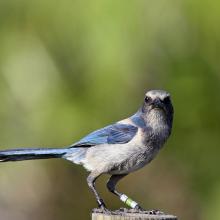 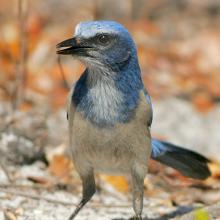 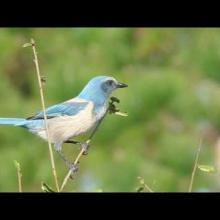 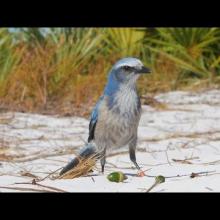