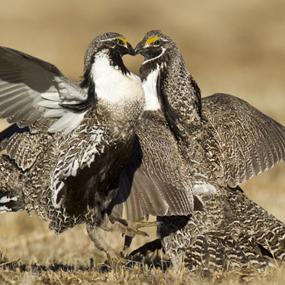 The Gunnison Sage-Grouse is one of the rarest birds in the United States. It was only recently acknowledged as its own species, separate from the Greater Sage-Grouse. In November 2014, it was listed as "threatened" under the federal Endangered Species Act. The striking males are consummate performers and can be found displaying on sagebrush plains in southeastern Utah and southwestern Colorado. Males gather and strut, hoping to impress females by fanning their long, spiky tail feathers. The rubbery sounds they make in display will surprise you!

You are hearing the courtship sounds of one of the rarest birds in the United States – there are fewer than 5000 left. So on November 12, 2014, the Gunnison Sage-Grouse was listed as "threatened" under the federal Endangered Species Act. Most of these birds live in the Gunnison Basin of southwest Colorado. But their concentration in such a small area means humans have a big impact. Oil and gas production, the development of ranchettes, and an ongoing drought have pushed the Gunnison Sage-Grouse to the edge. [Gunnison Sage-Grouse display sounds http://macaulaylibrary.org/audio/141137, 1.10-1.15]

Male Gunnison Sage-Grouse are star performers – they gather in sagebrush in spring and strut together, fanning long, spiky tail feathers. The five-pound grouse snap their heads forward, flipping what looks like a long ponytail of feathers above their heads. At the same moment, large air sacs on their chests plump forward, making these loud plopping sounds. [Gunnison Sage-Grouse display sounds http://macaulaylibrary.org/audio/141137, 1.10-1.15]

Females mate with the most impressive males.

Political and legal wrangling are bound to follow the Sage-Grouse's listing as threatened. But experience shows that in the long term, this new level of protection could enable the population to recover, if it's coupled with cooperation among competing interests. 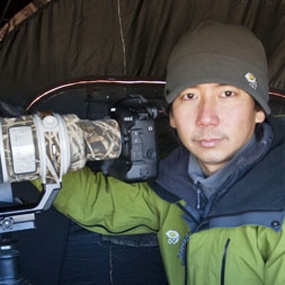 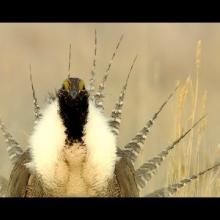