Spreading the word about the value of vultures. 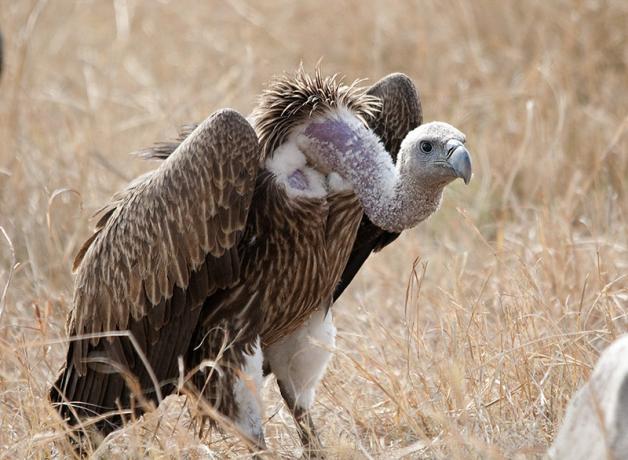 Five of Zimbabwe’s six vulture species are endangered. After poachers kill an elephant or other large animal by poisoning, vultures often die from eating the poisoned meat. Organizations such as BirdLife Zimbabwe are helping to form local groups that advocate for the conservation of vultures, which serve an important ecological role.

Hear more about efforts to protect Zimbabwe’s vultures on the Threatened podcast.

This is BirdNote.
[White-backed Vulture call, https://macaulaylibrary.org/asset/276362, 0:48-049]
Not everyone finds vultures appealing. But Jessica Dawson of Victoria Falls Wildlife Trust in Zimbabwe has no trouble describing the charms of a White-backed Vulture named Judge.
Jessica Dawson: Judge is seven years old. She's a beautiful bird. She stands just about two, two, and a half feet tall. She's got beautiful, sort of, different color feathers. From a dark brown at the end, going up to a lighter brown, and then a white, sort of, tuft at the neck, going onto the head. So she is a beautiful animal, and we're very fortunate to have her.
Judge was found in the wild with a damaged wing.
Zimbabwe has six vulture species, and five of them are endangered. The biggest threat: poachers using poison to kill elephants and other large mammals. Vultures feeding on carcasses then become poisoned themselves.
An organization called BirdLife Zimbabwe is working to spread the word about why vultures need help. Christal Dube, a farmer in the western part of the country, leads a local group that raises awareness.
Christal Dube: If people don't understand the value and the importance of that bird, they might think it's a useless bird. But we have since realized that it plays a very important role within the environment, particularly in terms of cleaning up carcasses, reduction on diseases … it does help a lot.
You can hear more about efforts to protect Zimbabwe’s vultures on the Threatened podcast. Listen in your podcast app or at BirdNote dot org. I’m Ari Daniel.
###
Senior Producer: John Kessler
Production Manager: Allison Wilson
Producer: Mark Bramhill
Associate Producer: Ellen Blackstone
Digital Producer: Conor Gearin
Field recordings by ish Mafundikwa.
Bird sounds provided by The Macaulay Library of Natural Sounds at the Cornell Lab of Ornithology, Ithaca, New York. White-backed Vulture ML 276362 recorded by P. Boesman.
BirdNote’s theme was composed and played by Nancy Rumbel and John Kessler.
© September 2021 BirdNote      Narrator: Ari Daniel