Seasonal winds - and climate change - have a huge effect on birds!
Download
iTunes
Subscribe to the Podcast 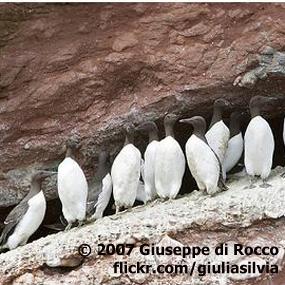 The breeding success of seabirds along the North Pacific coast, like these Common Murres, depends on the timing of seasonal winds. Spring winds from the Gulf of Alaska cause the upwelling of cold, nutrient-rich water. But if the upwelling is delayed, seabird breeding suffers. Warmer temperatures mean less upwelling, and the birds can't find enough to eat. In 2005, sea-surface temperatures along the coast were almost 2 degrees Fahrenheit warmer than the average temperatures for the last 120 years.

This is BirdNote.
[Calls of breeding colony of Common Murres]
The breeding success of seabirds along the North Pacific coast, like the Common Murres (pronounced merz) we’re hearing, depends on the timely arrival of seasonal winds.
[Sound of winds and waves]
Spring winds blowing down from the Gulf of Alaska cause the upwelling of cold, nutrient-rich water. According to University of Washington professor Julia Parrish, these nutrients “jump-start coastal production.” They nourish an abundance of fattening plankton like krill, and forage fish, like eulachon (pronounced OOH-luh-kun or YOO-luh-kahn), sandlance, and herring, on which seabirds feed as they prepare to lay eggs and care for chicks. [Calls from a breeding colony of Common Murres]
But timing is everything. If the transition to upwelling is delayed, seabird breeding suffers. In 2005, the winds came too late. Murres, Rhinoceros and Cassin’s Auklets, Tufted Puffins, and Double-crested Cormorants experienced widespread breeding failure. That year, sea-surface temperatures along the Pacific Northwest coast were almost two degrees Fahrenheit warmer than the average temperature for the last 120 years. Warmer temperatures mean less upwelling. The seabirds could not find enough to eat.
[Return to calls of Common Murres]
Since then, nearshore conditions have improved for seabirds. [2006 brought early and intensive upwelling, while 2007 through 2009 conformed to long-term trends.]
[Sound of wind and oceans waves]
But now the seabirds face the resurgence of an old threat — the Bald Eagle [Cry of the Bald Eagle]. Learn more tomorrow, on BirdNote.  [Alternate line: Learn more on BirdNote.org.] I’m Michael Stein.
###
Bird sounds provided by The Macaulay Library at the Cornell Lab of Ornithology, Ithaca, New York.  Calls of the colony of Common Murres recorded by M. Fischer; Common Murre chick and parent by Thomas G. Sander; and Bald Eagle by J. Storm.
Producer: John Kessler            Executive Producer: Chris Peterson      © 2010 Tune In to Nature.org     May 2010

Common Murres - More at All About Birds