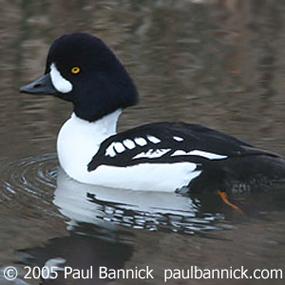 Scoter populations in South Puget Sound have declined by 69% since 1995. Other seabirds -- like this Barrow's Goldeneye -- have not fared well, either. Suspects include heavy metal contamination, a drop in herring populations, derelict fishing gear, and the destruction of shoreline habitat.

Find your local Audubon and see how you can help birds.

This is BirdNote.
[Waves and calls and wing-beats of Surf Scoters]
You have to admire the hardiness of sea ducks, making their living, day and night, on the frigid waters of Washington’s Puget Sound in winter. Thousands of sea ducks [Whistling wing-beats of Common Goldeneyes] – goldeneyes, scoters, Harlequin Ducks, Brant – descend on Puget Sound each fall. But during the last 40 years, the number of some, particularly scoters, has dropped dramatically. For example, the population of scoters in North Puget Sound has declined 60%. *
[Surf Scoters calling]
Since the late 1970s, the number of marine birds in the region has fallen by almost half. Possible causes for this decline include the destruction and degradation of breeding habitat, heavy metal contamination, and a drop in the herring population. Oil spills, inadvertent by-catch of birds in fishing nets, and the human alteration of the sound’s shorelines have taken a toll.
The plight of Puget Sound’s marine birds illustrates one of the great quiet stories of our time. These birds are increasingly subject to the cumulative weight of our actions. No one actively wishes them harm. But as we chart the health of the region over the years, their decline becomes evident. The question is: Can we find a way to coexist with the wild creatures with which we share the earth?
[Waves and wing-beats of Common Goldeneye]
There’s more to this story at birdnote.org.
###
Some bird sounds provided by The Macaulay Library of Natural Sounds at the Cornell Lab of Ornithology, Ithaca, New York. Wing beats of Common Goldeneyes [43099] W.W.H. Gunn; Barrow’s Goldeneye W.W.H. Gunn.
Calls and wing beats of Surf Scoters [1001 and 1002] recorded by Martyn Stewart of naturesound.org
Producer: John Kessler
Executive Producer: Chris Peterson
© 2013 Tune In to Nature.org    January 2013   Narrator: Mary McCann 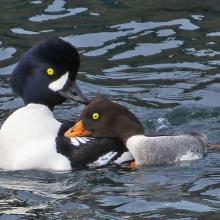