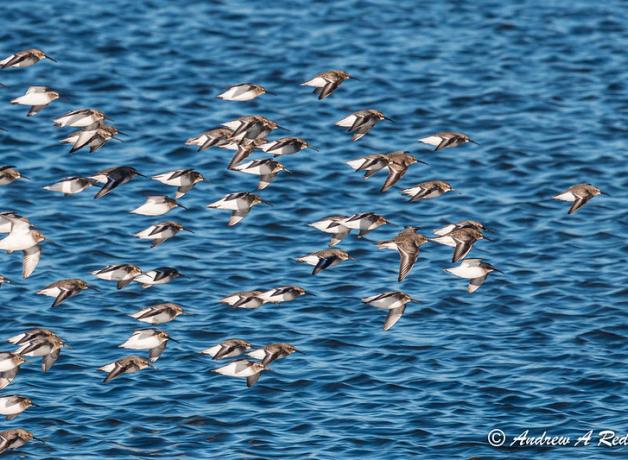 The southward migration of plovers and sandpipers – including these Dunlin – is a protracted affair, spanning up to five months. First to come south are post-breeding adults. In August and September, this summer's hatchlings pass through. Others arrive in October; and some stay right through the winter.

This is BirdNote!
[Chattering sound of Western Sandpiper flock]
Ahh, September along the coast! Surely those swirling masses of sandpipers that graced the coastal tide flats by the tens of thousands in April must be back now, performing with a final flourish, before migrating farther south.
[Sound of Western Sandpiper flock]
Well, not exactly. The tens of thousands of shorebirds that converged at staging points along the North American coasts in late April are part of a highly synchronized migration. Moving north together during a few weeks in spring, they reached their Arctic breeding grounds in time to quickly pair up and nest, making the most of the short northern season.
[Sounds of migrating Black-bellied Plover]
By contrast, the southward migration of plovers and sandpipers is a protracted affair, spanning up to five months. First to come south are post-breeding adults. Thousands reach the northern states by late June, with many more on the move in July.
[Sounds of migrating Dunlin]
By August and September, most of the new southbound arrivals are birds that hatched this summer, all in the crisply marked feathers of fresh plumage. Some, like these small sandpipers known as Dunlin, arrive in force as late as October. Many Dunlin will stick around all winter, on tide flats quite far north on both coasts of the United States.
[Continue sounds of migrating Dunlin]
Visit our web site, BirdNote.org, for more about which shorebirds you might see and where.
###
Call of the Dunlin provided by The Macaulay Library at the Cornell Lab of Ornithology, Ithaca, New York. Recorded by W.W.H. Gunn.
Call of the Western Sandpiper recorded and provided by Martyn Stewart at Naturesound.org.
Call of migrant flock of Black-bellied Plover recorded by K. Colver.
Ambient track by Kessler Productions
Producer: John Kessler
© 2010 Tune In to Nature.org               September 2010 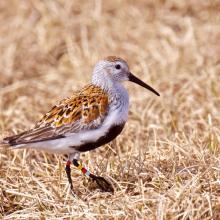 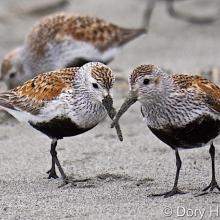 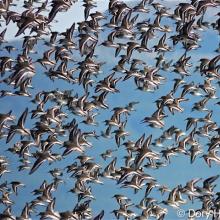 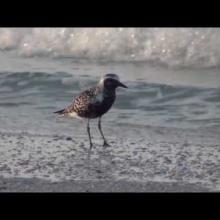