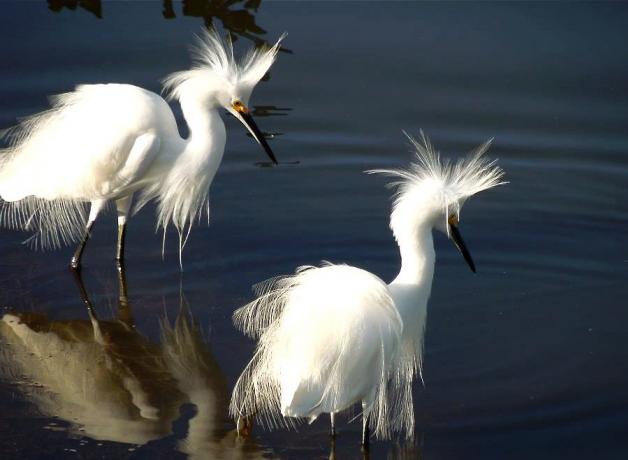 Today you’ll find Snowy Egrets in the south and central United States and in remnant wetlands along the Atlantic coast. But once, they were rare. During the late 1800s, millions of birds – including Snowy Egrets – were killed annually to adorn the hats of fashionable ladies. Outraged citizens took action, forming the Audubon movement and passing laws that reduced the slaughter.

Support for BirdNote comes from the Cornell Lab of Ornithology, offering online courses about birding. With a new nature journaling course at Academy.AllAboutBirds.org.

[Call of the Snowy Egret, with background of Okefenokee Swamp, Georgia]

The beauty of the small, slender Snowy Egret is in its fine white feathers and long, lacy plumes. You’ll find them wading in open waters and wetlands throughout much of the United States. But once, Snowy Egrets were rare.

During the late 1800s, five million birds a year including Snowy Egrets were killed so their feathers — and sometimes even the whole birds — could be added to the hats of fashionable ladies in Europe and America. In 1886, Snowy Egret plumes were worth twice as much as gold.

In a few hours during a walk through the streets of New York City, ornithologist Frank Chapman counted forty species of birds on the hats of the women he passed, including warblers, waxwings, Blue Jays, Bobwhites, and of course, Snowy Egrets.

The plundering for plumes continued until around 1910, when outraged citizens forced the passage of laws that reduced the slaughter. These are largely the same laws that protect many birds today.

“Killer hats” are now a thing of the past, and we can all appreciate the Snowy Egret in its natural habitat today.

[Call of the Snowy Egret but heavy on swamp ambient]

* Snowy Egret range map from Cornell’s All About Birds https://www.allaboutbirds.org/guide/Snowy_Egret/maps-range

(1) and (3) Birds of North America http://bna.birds.cornell.edu/bna/species/489/articles/introduction 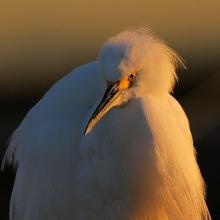