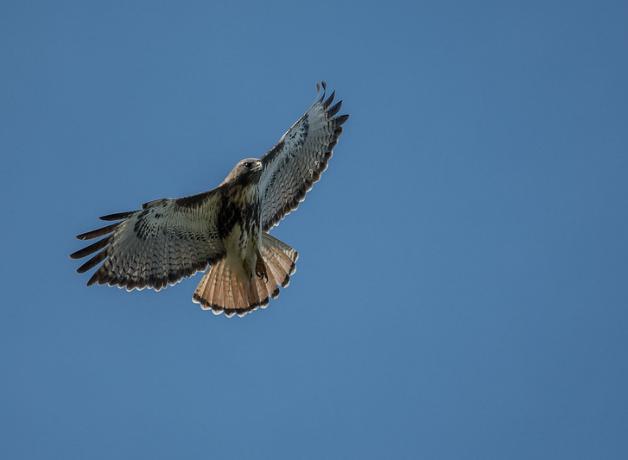 A Red-tailed Hawk soars on broad, rounded wings, the epitome of effortless flight. Without flapping, it traces a leisurely, rising circle. The hawk is riding a thermal, a column of warm rising air generated near the earth's surface by heat from the sun. The Red-tail periodically circles to stay within the thermal. Riding thermals is an energy-efficient way to search for prey below.

[“Oklahoma! Every night my honey lamb and I - Sit alone and talk and watch a hawk - Making lazy circles in the sky.”]

A Red-tailed Hawk soars above a roadway on broad, rounded wings, the epitome of effortless flight. Without flapping, it traces a leisurely, rising circle. This is the hawk you’re most likely to see in the Lower 48 and the one that was “makin’ lazy circles in the sky” in the musical Oklahoma. [Red-tailed Hawk’s cry]

The Red-tailed Hawk is riding a thermal, a column of warm rising air generated near the earth’s surface by heat from the sun. As the warm air expands upward, the hawk floats skyward, periodically circling to stay within the column of air. Slots between the long feathers at the hawk’s wingtips deflect drag. As the Red-tail reaches a desired altitude, it slides off the thermal and, gliding lower, finds another thermal to ride upward.

Riding thermals is an energy-efficient way for soaring hawks to search for prey. Hawks also rely on thermals and updrafts along ridges during long migrations, as they float for many miles through the sky. [Red-tailed Hawk’s familiar cry]