Stability and Change in Nature - Interview with Julia Parrish 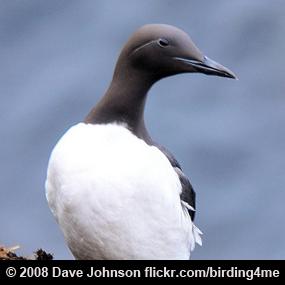 For two decades Julia Parrish of the University of Washington has studied the seabirds - like this Common Murre - of the Pacific Northwest Coast. What are her conclusions after 20 years? "I have been so often surprised and proved wrong. I'll have a concept or hypothesis, make a prediction about what we should see, and then I go back to the field and something else happens. So I have learned to become humble about explaining what's going on in the system. I'm constantly reminded that Nature is about this dynamic interplay. It's as much about change as it is about stability."

Stability and Change in Nature – The Research of Julia Parrish

This is BirdNote.
[Calls of a colony of Common Murres]
For two decades Julia Parrish of the University of Washington has studied the seabirds of the Pacific Northwest Coast. We asked Dr. Parrish what her conclusions are after from 20 years of field work:
Track 175; 18:00 – …I have been so often surprised and proved wrong… so I’ll have a concept or hypothesis…allowing me to make a prediction about what we should see, and I go back to the field and something else happens…So I have learned over time to become humble about explaining everything that’s going on in the system.

[Sounds of waves on the coast and calls of Common Murres]
Dr. Parrish has studied intensively the bird life of Tatoush Island.
18:35 – My sense is that we have a lot of knowledge about the interaction between seabirds and their predators in the Pacific Northwest, but that doesn’t mean that we know everything that’s going on. When I go out to the island in a year when murres innovate and colonize in new habitat, or eagles innovate and find a new way of attacking their prey or even discover a new prey source, [call of a Bald Eagle] I’m constantly reminded that Nature is about this dynamic interplay between species. It’s as much about change as it is about stability.

Dr. Julia Parrish at University of WashingtonCommon Murres - More at All About Birds