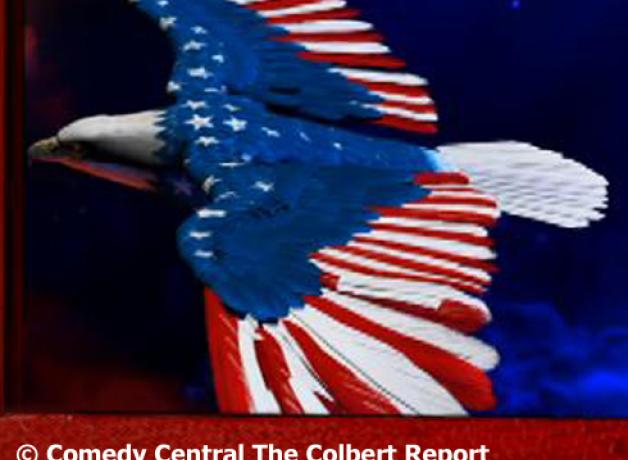 Watch Stephen Colbert and The Colbert Report on Comedy Central, and you'll see a Bald Eagle streak across the screen, screaming, talons outstretched, ferocious, majestic. But - in the spirit of truthiness - we must declare that the bird you hear is not a Bald Eagle, but a Red-tailed Hawk. Be sure to read the story about Stephen, Jr. - a real Bald Eagle named after Stephen Colbert.

[Opening music from The Colbert Report, with Red-tailed Hawk screaming, from opening credits]

Anyone familiar with Stephen Colbert and The Colbert Report on Comedy Central will recognize this signature sound.

A Bald Eagle streaks across the screen, talons outstretched, ferocious, majestic. But a word about all this… A few years ago, Stephen made famous the word “truthiness”.

And so, in the very spirit of truthiness, we must declare that the bird you hear is not a Bald Eagle at all, but a Red-tailed Hawk. [Red-tailed Hawk cry]

Truthfully – or truthily — a Bald Eagle doesn’t sound all that ferocious or majestic. Here’s how it really sounds. [Bald Eagle call]

In 2006, the San Francisco Zoo named an unhatched Bald Eagle in Colbert’s honor – “Stephen, Jr.” Stephen, Jr. was taken as an egg from Santa Cruz Island and hatched as part of the California Bald Eagle breeding program.

Junior migrates to Canada and back every year. He now has his own breeding territory, on Santa Cruz Island.

And speaking of migrating! As Stephen Colbert leaves one show for another, we wish him – and Stephen, Jr. – all the best!

[Call of a Red-tailed Hawk]

And Nation, that’s the word!

Calls provided by The Macaulay Library at the Cornell Lab of Ornithology, Ithaca, New York. Call of the Bald Eagle recorded by J. Storm. Call of the Red-tailed Hawk recorded by L.J. Peyton.