They're flying... migrating... so when do they sleep? 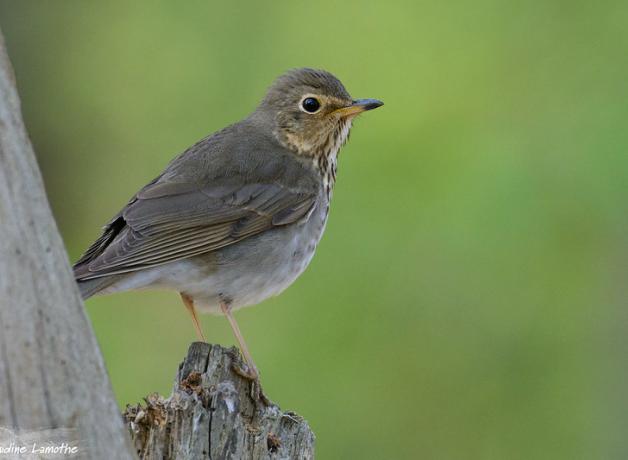 When the Swainson's Thrush departs its wintering grounds in Mexico or South America, it travels at night. When does it sleep? Recent research by scientists at Bowling Green State University suggests that during migration, Swainson's Thrushes take hundreds of "power naps," lasting only a few seconds at a time. The thrushes are also apparently able to rest half their brain by sleeping with one eye closed. The other eye remains open, with half the brain alert for threats from predators.

This is BirdNote.
[Song of the Swainson’s Thrush]
If you’re lucky, in late spring in the forests of the North and West you’ll hear the melodious, spiraling song of the Swainson’s Thrush. It will linger with you like your body’s memory of a gentle swell after a day on the open water.
[Song of the Swainson’s Thrush]
March finds these secretive, bright-eyed singers departing their wintering grounds in Mexico and South America. They travel at night and can cover more than 200 miles in some eight hours of flying. To replenish themselves from the rigors of their journey, they must stop and feed during the day. When do they sleep?
[“Quip” call of Swainson’s Thrush]
Research by Dr. Thomas Fuchs [Fukes] 1/ of Pennsylvania State University suggests that while migrating, Swainson’s Thrushes take numerous daytime “micro naps,” lasting only a few seconds. The birds are also apparently able to rest half their brain by sleeping with one eye closed. The other eye remains open, with half the brain alert for threats from predators.
When they arrive on their breeding grounds in mid-May, you’d think they’d be ready for a long rest. But the demanding tasks of establishing a territory and finding a mate await them immediately. And that’s why the male thrush sings that haunting song.
[Song of the Swainson’s Thrush]
For BirdNote, I’m Mary McCann.
###
Audio of the Swainson’s Thrush provided by The Macaulay Library at the Cornell Lab of Ornithology, Ithaca, New York. Song and “quip” call recorded by G.A. Keller.
Producer: John Kessler
Executive Producer: Chris Peterson
© 2014 Tune In to Nature.org   May 2014   Narrator: Mary McCann

Learn more about power-nappingSwainson's Thrush - More at All About Birds