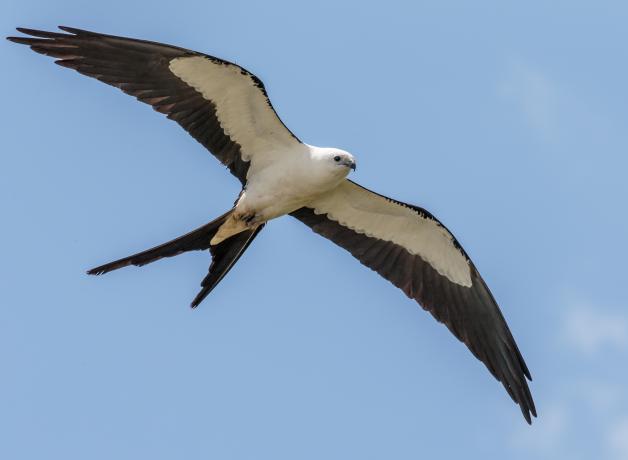 A bird of prey in the American Southeast takes grace to an utterly new level. It's the Swallow-tailed Kite. A sleek raptor with a deeply forked tail, the Swallow-tailed Kite almost never flaps its wings. The bird makes sudden tight turns, upside-down moves, and quick backward dives, all by pivoting and moving its tail. Kites snatch insects out of the air and take lizards and snakes off leaves with their talons. Then they transfer prey from their talons to their hooked beaks, all while on the wing.

This page is sponsored by Olivia Finch and Billy Trout4388.
Thanks for supporting the new BirdNote.org, coming in 2020!

Swallow-tailed Kite - Magician on the Wing

Some birds are wonderfully graceful in flight. Swallows spring to mind, with their deft swoops and glides. But there's a bird of prey in the American Southeast that takes grace to an utterly new level: the Swallow-tailed Kite.

A Swallow-tailed Kite, even perched, is a lovely bird. It’s a slim, sleek raptor, with a pure white head and underside, offset by exceptionally long, slender black wings. True to its name, it sports a long, deeply forked black tail.

A Swallow-tailed Kite in flight almost never flaps its wings. Instead, the kite uses its tail to pivot and twist to guide its movements. The bird can make sudden, tight turns, upside-down moves, and quick backward dives. Its aerial maneuvers hardly seem like flight at all, more like slipping and sliding across the air.

Kites catch all their prey on the wing, snatching large flying insects out of the air and taking lizards and snakes off leaves in the trees with their talons. Then, in a magician-quick motion, the kite transfers its prey from its talons to its hooked beak.

Spring or summer is the time to see Swallow-tailed Kites in the Southeast. Then they’re off to South America, covering hundreds or thousands of miles, all with hardly a flap of the wing.
For BirdNote, I’m Mary McCann. 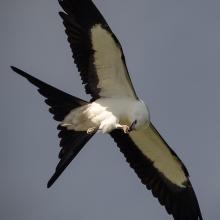