Swallows and Mud - A Myth?

Do swallows really hibernate in the mud during winter? 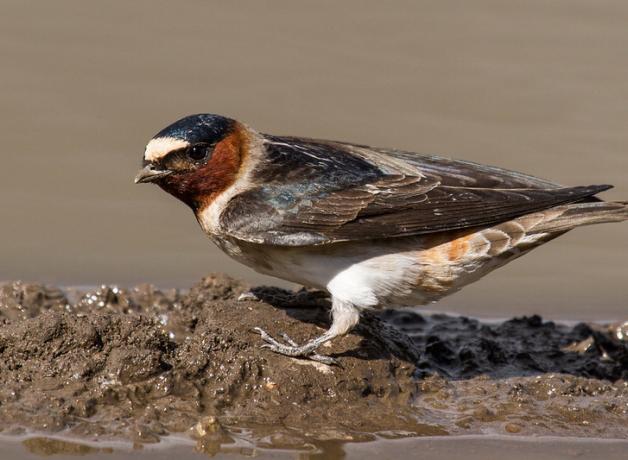 The swallows that make mud nests in spring and catch flying insects all summer are now far south in Mexico, and Central and South America. It's only as recently as the end of the nineteenth century that ornithologists agreed that swallows, including this Cliff Swallow, migrate. Many formerly believed that swallows and swifts spent the winter hibernating in mud, awakening each spring to dart through the skies again.

Swallows and Mud – A Myth?

The swallows that make their nests of mud in spring catch flying insects all summer. In the autumn, they twitter on telephone wires. And by now, they’ve headed south to Mexico and Central and South America. [Repeat chatter of Barn Swallows]

It’s only as recently as the end of the nineteenth century that ornithologists agreed that swallows migrate. Prior to that, some believed these small, sleek fliers spent the winter hibernating in mud at the bottom of ponds or tucked into the banks of rivers. Then each spring, according to this theory, the swallows resurrected to dart through the skies again. Perhaps part of this notion came from an old legend that the Christ-child made little birds from mud that came to life as swallows.

Digging deeper into the mud-hibernating theory, we find those misinformed early ornithologists might have known more than we give them credit for. We’ve learned that swifts, [call of the Vaux’s Swifts] small, long-winged birds that resemble swallows, shift into a state of torpor at night, in order to conserve energy. Swifts have an extremely high metabolic rate and their “mini-hibernation” helps keep them from starving. [More chattering of the Barn Swallows]

To learn more about swallows and swifts, begin at our website, BirdNote.org. I’m Michael Stein. 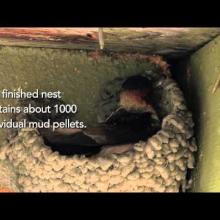 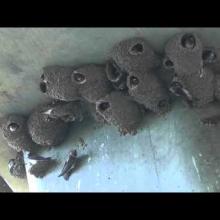