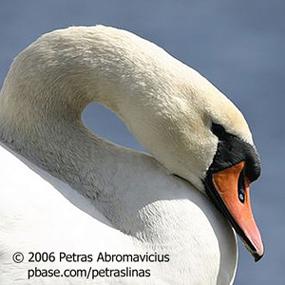 The idea of the "swan song" recurs from Aesop to Ovid to Plato to Tennyson. Ovid described it, "There, she poured out her words of grief, tearfully, in faint tones, in harmony with sadness, just as the swan sings once, in dying, its own funeral song." But it's based on a sweet fallacy - that a swan sings only when it nears death. And calling the sounds that a swan makes a "song" might be a bit off, too!

Would you like to make a gift to BirdNote? Begin here.

As a flight of Tundra Swans passes overhead on a winter day, their voices swell in a kind of wild music. [Flock of Tundra Swans calling] You might want to call it a “swan song.”

The term “swan song” has an old and intriguing lineage. The ancient Greeks believed that swans remained silent most of their lives, singing an exquisite, heartrending lament only at the moment of their death. Even the great classical philosopher Plato believed the tale.

For the Greeks, the one familiar swan would have been the species called Mute Swan. Although the Mute Swan is not as silent as its name suggests, its voice is limited to an assortment of unmusical grunts and hisses. [Mute Swan sounds]

The swan song tale is truly legendary [Music from Sibelius’ The Swan of Tuonela], based on a fallacy, but one so endearing that it has survived for centuries. The terminal swan song recurs from Ovid to Aesop to Tennyson.

In Shakespeare’s Merchant of Venice, Portia says "Let music sound while he doth make his choice; / Then, if he lose, he makes a swan-like end, / Fading in music.”

Thank you for listening to BirdNote. We’re also on the web at birdnote.org. 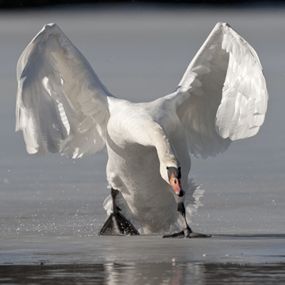