Syrinx and the Satyr 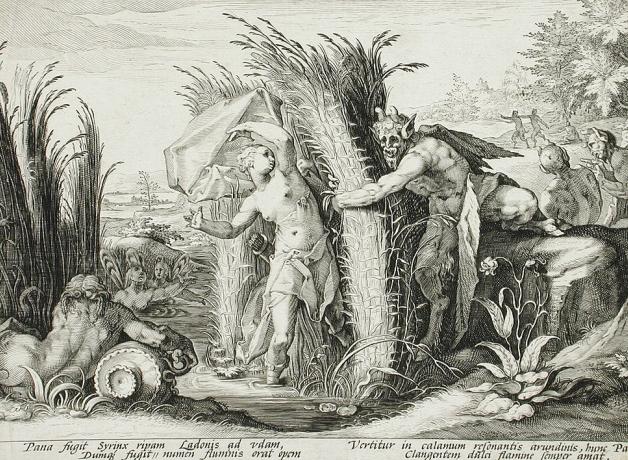 Birdsong owes its beauty and variety to a complex structure called the syrinx. The name comes from an ancient Greek story. Syrinx was a beautiful wood nymph, and she was trying to escape the advances of the satyr Pan. Just as Pan caught her, Syrinx was transformed into reeds. And Pan was left holding an armful of reeds. He sighed, and as his breath moved across the reeds, it made a sound, which he took to be the mournful voice of the enchanted Syrinx. This is the instrument we know today as Pan pipes or the Pan flute. And a bird’s syrinx is named after those Greek pipes.

Syrinx and the Satyr

Birdsong owes its beauty and variety to a complex structure of muscles and membranes called the syrinx. You’ll find the syrinx at the base of the windpipe, where the bronchial tubes branch out to the lungs. And it’s unique to birds.

The name syrinx comes from an ancient Greek story. Syrinx was a beautiful wood nymph — a minor deity — and she was fleeing through the woods to escape the unwanted romantic advances of the satyr Pan, a half-man/half-goat.

Syrinx races to the river’s edge and begs the river nymphs to change her into some other form to get away from Pan.

And just as Pan arrives and embraces her, Syrinx is transformed into reeds — like cattails in a marsh. And Pan is left holding an armful of reeds. So he lets out this big sigh, and his breath moves across the reeds and makes a sound, which he thinks is the mournful voice of the enchanted Syrinx.

So, Pan kept the reeds and fashioned a set of pipes, so he would always have the voice of his beloved Syrinx with him. This is the instrument we know today as Pan pipes or the Pan flute.

The Greeks named these pipes “Syrinx,” after the wood nymph. And we’ve named the source of the voices of our beloved birds the syrinx, after those Greek pipes.