A Treasure Chest of Hummingbirds 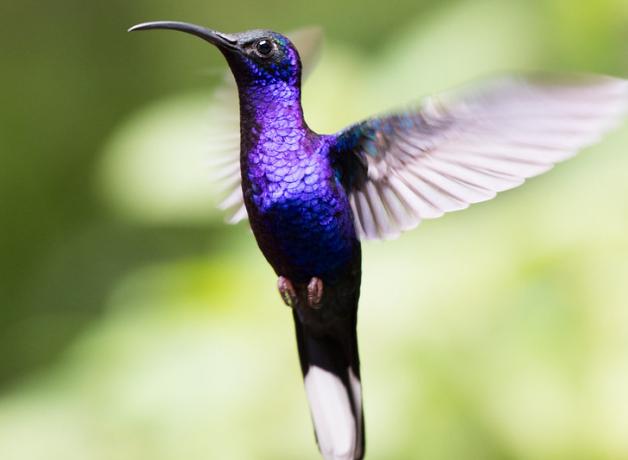 Hummingbirds' names evoke their exquisite qualities and variety, from sabrewings to woodstars to sunangels-to this Violet Sabre-wing. Central and South America are home to well over 300 species of hummingbirds! Find out more about hummingbird migration -- and what hummingbirds might be coming your way. Learn how to attract hummingbirds to your yard. Browse a lovely gallery of photos.

A Treasure Chest of Hummingbirds

This is BirdNote! [Song of Anna’s Hummingbird]

A baker’s dozen hummingbirds regularly turn up in the United States. Most don’t spend the winter. Only the Anna’s Hummingbird of the western states appears to brave the cold. But Central and South America are home to well over 300 species of hummingbirds! [Sound of Ruby-throated Hummingbird]

Their names rise to the challenge of meeting these birds’ exquisite qualities and variety. There are brilliants and mangos, thornbills and lancebills, emeralds and sapphires. Not to mention sabrewings, woodstars, and sunangels. There is a Fiery-tailed Awlbill, a Bearded Helmetcrest, a Black-eared Fairy, and a Green-tailed Trainbearer.

And we haven’t even left Venezuela yet!

To see some pretty amazing photos of hummingbirds, come to our website, BirdNote.org. I’m Michael Stein.