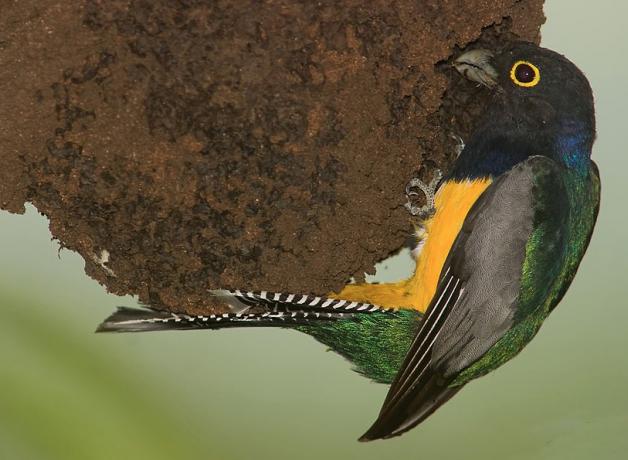 The "Violaceous" Trogon (recently split into three species), which nests in Mexico, Central America, and northern South America, often excavates its dwelling within a large, active wasp or termite nest. It begins by devouring some of the insects, then digs a cavity large enough to accommodate the birds and their eggs. While they may continue to snack on resident wasps or termites throughout nesting, the trogons never eliminate all the insects, creating a nest that few predators would dare disturb.

BirdNote gives you the sounds of birds every day, and you can get the sights as well when you follow us on Instagram, @BirdNoteRadio.

[Call of the Violaceous Trogon]

When it comes time to nest, birds require a site that protects them, both from weather and from predators. Nests are perched high in trees, secreted deep in dense branches, or concealed in cavities. Some birds take a further step — nesting where they are defended by stinging insects.
The Violaceous Trogon (pronounced TRO-gahn) of the New World tropics often excavates its dwelling within a large, active wasps’ nest. [Violaceous Trogon call]

The Violaceous Trogon is a striking bird, ten inches tall with a deep blue head and breast and bright yellow belly. It’s adept at catching insects, and it begins its work at the wasps’ nest by eating some of the wasps. A pair of trogons then digs a cavity within the massive nest, large enough to accommodate themselves and their eggs. [Violaceous Trogon call]

While they may continue to snack on resident wasps throughout nesting, the trogons never eliminate all the wasps. And they create a nest that few predators would dare disturb.

Some birds nest in large ant or termite colonies, too. Safety is where you find it.

I'm Mary McCann. We'd like to thank all who made a gift during the holidays!

BirdNote gives you the sounds of birds every day, and you can get the sights as well when you follow us on Instagram, at BirdNote radio. / at BirdNoteRadio 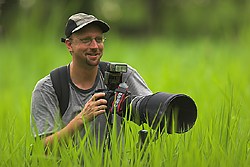 The "Violaceous" Trogon — Learn More at Beauty of BirdsWill you become a BirdNote benefactor? Begin here! 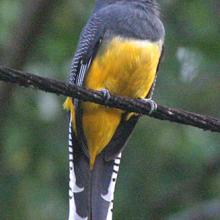 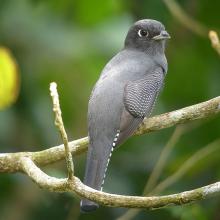 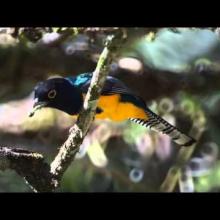 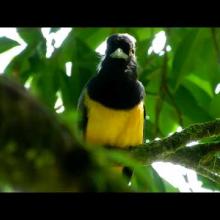