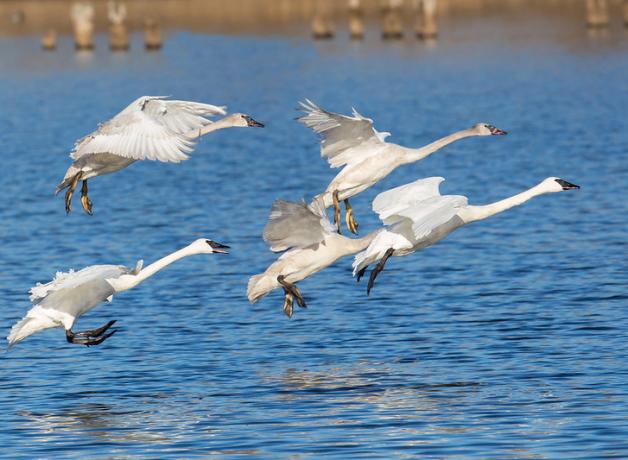 Trumpeter Swans weigh over 25 pounds and measure about five feet from beak to tail. They were nearly hunted to extinction by the turn of the twentieth century. In Arkansas, a small flock of Trumpeter Swans began spending the winter at Magness Lake in the 1990s. It has now grown to one of the biggest winter swan flocks in the Southeast. In recognition of its value to the swans, Magness Lake has been designated an Important Bird Area.

With a voice like that, there’s no wondering where Trumpeter Swans get their name. Weighing over 25 pounds and measuring about five feet from beak to tail, these swans are the heaviest flying birds in North America.
This flock of Trumpeter Swans is coming in for a splash landing at Magness Lake just outside of Heber Springs in Arkansas.

Seeing hundreds of them here, it’s hard to believe these birds were nearly hunted to extinction by the turn of the twentieth century. This region is part of their comeback story.

After a small flock of swans began wintering at Magness Lake in the 1990s, the Arkansas Audubon Society named the site an Important Bird Area. Now Arkansas hosts one of the biggest populations of wintering Trumpeter Swans in the Southern U.S.

They’ll spend the winter here and at nearby ponds, foraging in the shallows in search of aquatic plants. As they lift their black beaks back to the surface, sparkling rivulets of water roll off their long, graceful necks.

After a long day of dabbling, the flock is ready to roost for the night.

Because of their immense size, they need at least 100 yards of watery runway to become airborne.

And they’re off — taking flight into the winter sunset. For BirdNote, I’m Ariana Remmel.