Tune Up Your Ears - West 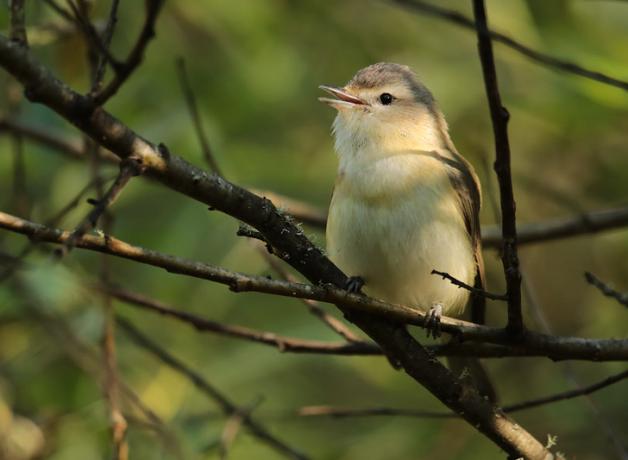 By March in the West, Song Sparrows and other songbirds that don't migrate are already singing heartily to attract mates. Many other birds - including this Warbling Vireo - will return north from the tropics in April and May, announcing themselves in song as soon as they arrive in nesting areas. Now is the perfect time to tune up your ears. Get BirdNote as a podcast. Sign up here.

Tune Up Your Ears for Spring Bird Song - West

This is BirdNote.
[Song Sparrow song]
In the West, the gentle, resonant notes of a Song Sparrow proclaim, “Spring is near!”
By March, Song Sparrows and other songbirds that don’t migrate are already singing heartily to attract mates. And the full richness of spring bird song is just around the corner. [Song of Song Sparrow] Many other birds will return north from the tropics in April and May, announcing themselves in song as soon as they arrive in nesting areas.
That makes now the perfect time to tune up your ear, to learn who’s making those lovely bird sounds. [Common Yellowthroat song] Cattail marshes will soon ring with the galloping melody of the Common Yellowthroat. [Common Yellowthroat song] The sweet, slurred song of the Yellow Warbler [Yellow Warbler song] will rise from stands of streamside willows, alongside the rhythmic phrases of the Warbling Vireo [Warbling Vireo song western U.S.]. And in June, the shady woods will echo once again with the flutelike music of the Swainson’s Thrush [Swainson’s Thrush song].
Wherever you live, with the advent of spring, birds renew the world with song.
[Song Sparrow song]
To put names to the bird songs you hear, come to our website, BirdNote.org.
###
Sounds of provided by The Macaulay Library of Natural Sounds at the Cornell Lab of Ornithology, Ithaca, New York. Songs of: Song Sparrow recorded by A.A. Allen; Common Yellowthroat by W.L. Hershberger; Yellow Warbler by W.R. Fish; Warbling Vireo by T.G. Sander; Swainson’s Thrush by G.A. Keller CD 3-26.
Producer: John Kessler
Executive Producer: Chris Peterson
© 2014 Tune In to Nature.org       March 2017/2020   Narrator: Mary McCann

Tweets 'n' Squawks - Learn how to bird by ear!Warbling Vireo - More at All About Birds 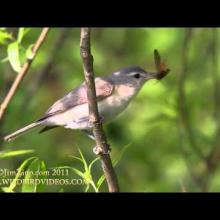 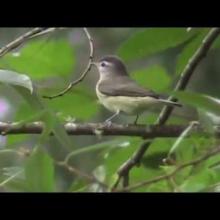