They have to compete with noises of the city! 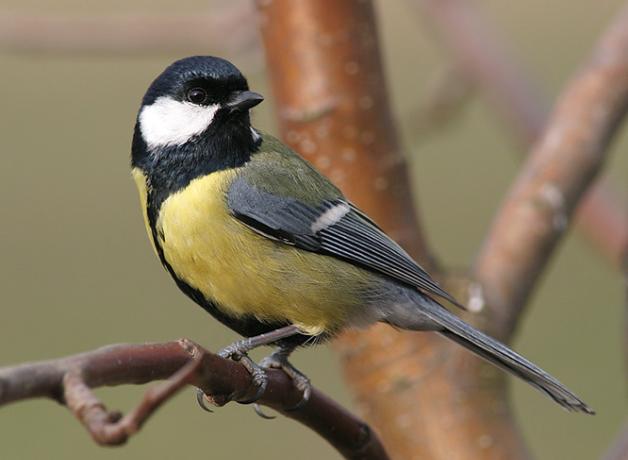 The soft whistles of this Great Tit, a common European bird, can be hard to hear over city noises. So these birds now sing at a higher pitch and faster than normal. This song carries better over the traffic noise of the city. A bird singing at a higher range is better able to declare its territory and attract a mate. The songs of these urban birds are also faster, probably so they can be repeated more often. Read more about city bird song research done in the UK.

This is BirdNote.
[Normal Great Tit song from forest, with low and high notes]
This is the song of a Great Tit, one of the most familiar sounds of the European spring. The Great Tit, a relative of our chickadee, is common in the forests of Europe. Its song is more varied than the simple whistles of our chickadees. [Great Tit song from forest, F from Slabbekoorn]
Great Tits are also common in city gardens, where the sounds of the city [Some traffic noises here] can make the soft whistles of songbirds hard to hear. As a consequence, Great Tits in London, Paris, and Berlin have modified their behavior. They now sing at a higher pitch and faster than normal. One way they do this is to drop the lower-pitched notes from their song. [Urban Great Tit song, E from Slabbekoorn]
Such a song carries better over the traffic noise of the city. And a bird that has shifted to a higher range is better able to declare its territory and attract a mate. Urban songs are also faster, probably so they can be repeated more often. Let’s listen to a forest bird [F from Slabbekoorn], and now its city cousin [E from Slabbekoorn]. Once again, the forest bird [F from Slabbekoorn]. And now the city bird [E from Slabbekoorn].
Listen to BirdNote any time and place you like when you subscribe to our podcast. Begin at our website, BirdNote.org. I’m Michael Stein.
###
First two songs of the Great Tit and ambient European garden recorded by Martyn Stewart, naturesound.org
Urban / Forest Great Tit (“E” and “F”) comparison songs recorded by Hans Slabbekoorn: Leiden University, Netherlands.
Producer: John Kessler
Executive Producer: Chris Peterson
© 2013 Tune In to Nature.org            March 2013        Narrator: Michael Stein

ScienceDaily.com has more!Things are changing in San Francisco, too!The Guardian article on city birdsong researchSome birds are changing physically, too. Check this out!Great Tit - More at the Royal Society for Protection of BirdsSign up for the BirdNote podcast